SIMECA: A radiative wind model for Be stars envelope developed at the O.C.A.

The stellar wind is at the origin of a two components, envelope, which is characterized by an equatorial plane with high density and low expansion where the Balmer emission lines are supposed to be formed. Whereas, a polar region with low density and high expansion is supposed to be responsible for UV absorption line profiles that are Doppler shifted with velocities up to 2000 km/s. This envelope also produce a linear polarization by free electrons of about 1.0-1.5%, and an IR excess that has been measured by IRAS.

Numerous ad-hoc models attempting to reproduce isolated characteristics of Be stars have been proposed in the past (Poeckert and Marlborough 1978; Waters & Marlborough 1992). They try to fit a few observable features by constraining as many free parameters as possible. We propose a strategy which lies between a totally ad-hoc and a physically consistent approach which starts from the hydrodynamic equations in the polar regions in order to provide the density distribution and the velocity fields throughout the envelope. Moreover, this approach enables us to produce intensity maps as a function of wavelength and introduce high angular resolution data in our model by computing theoretical visibilities.

We have built a model producing both spectroscopic and interferometric synthetic data that have been compared to the GI2T observations. This model is a latitude-dependent radiative wind numerical code for Be stars which clearly shows that the morphology of the circumstellar envelope depends strongly on the central observational wavelength and bandwidth. The line force in our model is the same as used by Friend & Abbott (1986), but we introduce a varying contribution of thin and thick lines from pole to equator by adopting radiative parameters which are latitude-dependent. The velocity fields and density relationships derived from the hydrodynamic equations are then used for solving the statistical equilibrium equations. By adopting the Sobolev approximation, we could easily obtain a good estimate of both electronic density and hydrogen level populations throughout the envelope. The numerical calculation was performed for parameters characterisic of the Be star γ Cassiopeiae.

We have obtained an Hα emission profile from our rotating and expanding wind model that is in good agreement with the observed spectra. Our computed intensity maps, in both the continuum and Halpha, agree reasonably well with maps derived from actually observed visibilities. We have also computed intensity maps across the Hα line in order to obtain the change in visibility as a function of Doppler shift across the emission line. The maps are symmetrical around the central wavelength due to the fact that our model is axi-symmetric. A comparison with the visibility obtained from these maps and the GI2T data is shown bellow for the 20.7 meter baseline. The agreement is good within errors bars of the data. This agreement is important because due to the structure of the velocity field in the envelope, its morphology strongly depend on the central observational wavelength
and bandwidth. Finally the model indicates that a radiative wind, driven mainly by optically thin lines at the equator, is a likely scenario for γ Cas. This is discussed in greater depth in Stee, Ph. and Araujo, F.X. 1994, "Line profiles and intensity maps from an axi-symmetric radiative wind model for Be stars", 1994, A&A, 292, 221

Some results obtained with SIMECA

Intensity maps from our model of the Be star γ Cassiopeiae at different Doppler-Shifts across the Hα emission line.
Respectively from the left to the right and from the top to the bottom: 6532, 6542, 6546, 6550, 6554, 6558, 6562 et 6574 Angstrom.
Each map is computed within a spectral band of 4 Angstrom.
From these maps theoritical visibilities are computed and compared to GI2T data. At the center: Hα emission line obtained from the same model.

We have also studed the rotational velocity law in the envelope of γ Cas. We have shown that Keplerian rotation seems to be the better law and that only Differential-Spectro-Interferometry can distinguish between these different velocity laws. If you are interested see: "On the Kinematics of the Be star γ Cassiopeiae", A&A, 311, 945. Here is an exemple from this paper:

Shift of the photocenter of each map in the sky plane. The solid thick
line is the direction of the rotation axis. Each visibility point is computed
within a 4 Angstrom bandwidth. Solid line: constant rotation., dotted:
beta=0.25, dashed: Keplerian rotation, dash dot line: angular momentum
conservation. If you are interested see:"On the Kinematics of the Be star
γ Cassiopeiae", A&A, 311, 945

VEGA: Visible spEctroGraph and polArimeter for the CHARA Array: Principle and performance

Among optical stellar interferometers, the CHARA Array located at Mt Wilson in California offers the potential of very long baselines (up to 330m) and the prospect of coupling multiple beam combiners. This paper presents the principle and the measured performance of VEGA, Visible spEctroGraph and polArimeter installed in September 2007 at the coherent focus of the array.

With 0.3 millisecond of arc of spatial resolution and up to 30000 of spectral resolution, VEGA intends to measure fundamental parameters of stars, to study stellar activities and to image and analyze circumstellar environments. We describe the observing modes that have been implemented for this spectro-polarimeter and show actual performances measured on the sky during the first observing runs.

The astrophysical programs are described in relation to the observing modes of the instrument, the presentation of the spectrograph and of the interface table is shown and finally the data is presented. We discuss the perspectives of further development in the framework of the CHARA Array.

We show that VEGA/CHARA is fully operational. The current limiting magnitude is nearly 7 but the results depend on the observing conditions (seeing, spectral resolution, etc). We have validated the stability of the instrumental visibility at the level of 1 to 2% over half an hour and of the instrumental polarization for various declinations. Some examples of squared visibility and differential visibility are presented.

The spectro-polarimeter VEGA has been installed and successfully tested on CHARA. It will permit stellar physics studies at unprecedented spectral and spatial resolutions. 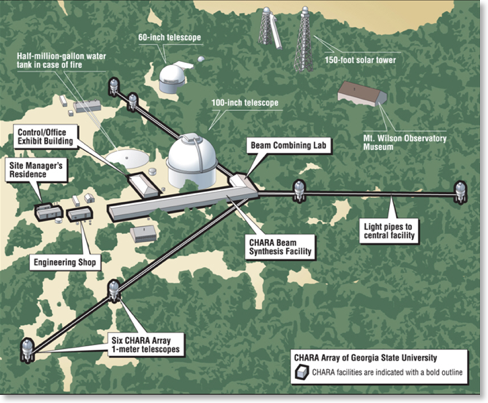 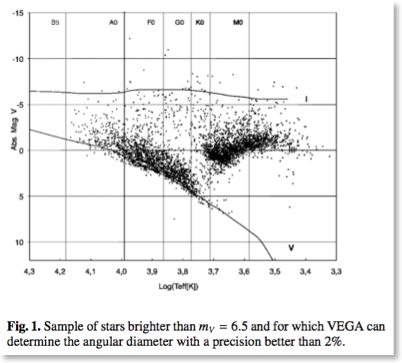 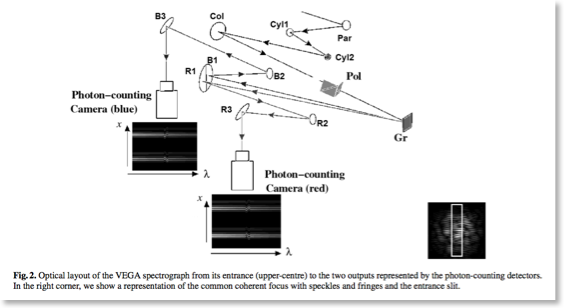 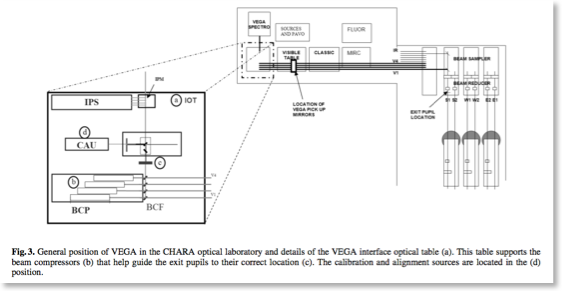 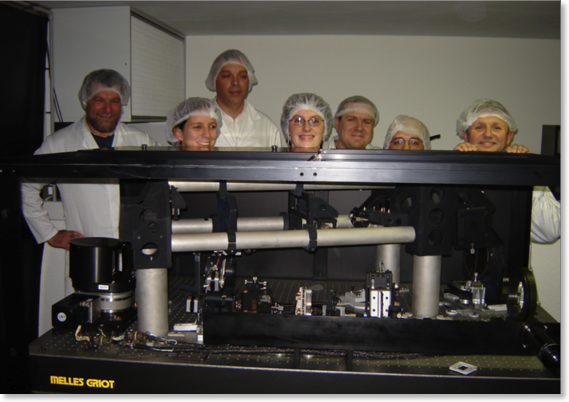 The VEGA focal instrument with part of the OCA dream team during tests in Grasse (France). From left to right: Daniel, Karine, François, Aurélie, Alain, Denis and Jean-Michel. 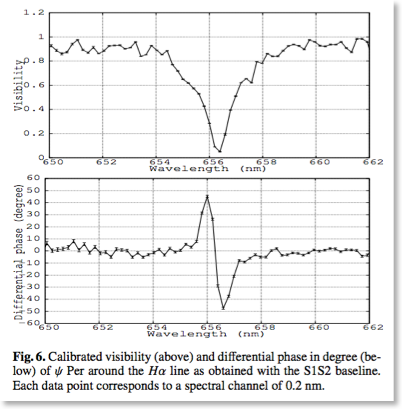 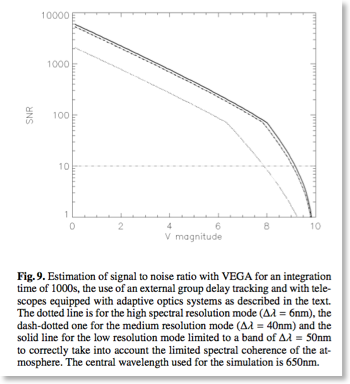 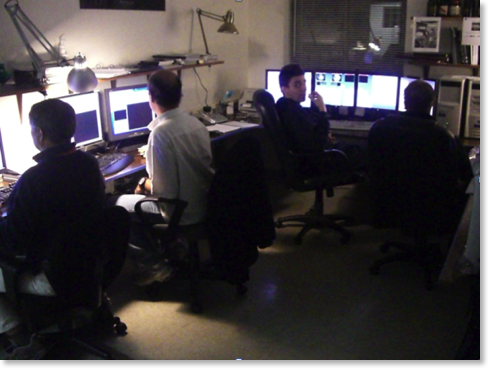 A view of the control room @ Mt Wilson.

Spatio-spectral encoding of fringes in optical long baseline interferometry: Example of the 3T and 4T recombining mode of VEGA/CHARA

One of the main challenges of optical stellar interferometers is to increase the number of telescopes in the recombining unit to provide a larger number of measurements and an improved imaging capability. The need to at the same time keep the important spectroscopic capabilities leads to complex recombining schemes that may limit further development.

This paper aims at describing the possibilities of combining the spatial and spectral encoding of fringes for the design of more compact beam combiners and for minimizing the number of pixels that must be read.

In this paper we establish the formalism of the spatio-spectral fringe encoding, discuss general applications and describe an actual implementation in the 3T/4T observing mode of the VEGA (Visible spEctroGraph and polArimeter) instrument installed at the coherent focus of the CHARA Array located on Mt Wilson in California. We finally present the science cases made possible by this instrumental implementation in the case of VEGA/CHARA.

We demonstrate the interest of implementing an optimized spatio-spectral encoding of fringes in a multi-telescope beam combiner. On-sky results, obtained with the 3T mode of the VEGA combiner are presented. At visible wavelengths and with the hectometric baselines of CHARA, sub-mas stellar diameters could be determined with a precision of a few percent with a spectral resolution of 5000. Our first estimates of closure phase show that accuracies better than 1 degree can be achieved.

The first on-sky results obtained with the 3T-4T VEGA instrument using spatio-spectral fringe encoding show the validity of using this principle in the design of future complex beam combiners. 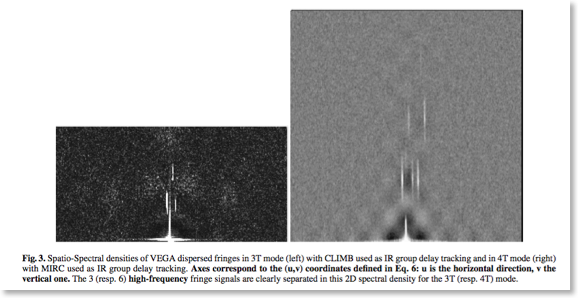 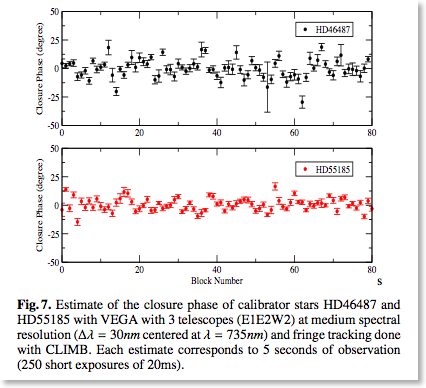 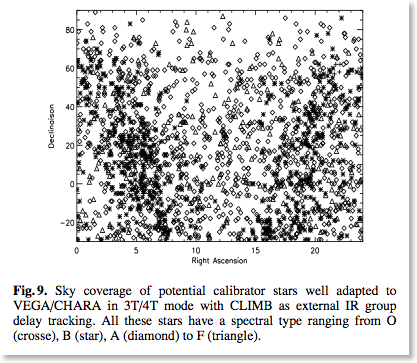