The Asteroid Impact & Deflection Assessment (AIDA) mission is a joint project of ESA and NASA. It is a technology demonstration of the kinetic impactor concept to deflect a small asteroid and to characterize its physical properties. It started in 2011 as a joint study between JHU/APL, NASA, the Côte d’Azur Observatory (OCA, Nice, France) and DLR. The mission went into phase A/B1 at ESA in early 2015 for 15 months and will enter into Phase A at NASA in spring 2015 (see News below). You can watch the Video explaining the concept on the ESA website (click here). AIDA is composed of the projectile called DART (Double Asteroid Redirection Test) and an observer satellite called AIM (Asteroid Impact Mission), each under study by NASA and ESA, respectively.The combination of both spacecrafts is referred to as AIDA. As in the separate DART and AIM studies, the target of this mission is the binary asteroid system (65803) Didymos. For a successful joint mission, one spacecraft, DART would impact the secondary of the Didymos binary system in October 2022 while AIM would first characterize the target asteroid (surface and internal properties), observe the impact event and measure any change in the relative orbit. 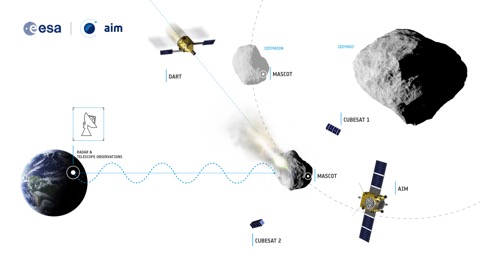 Another Video made by the APL/JHU laboratory (USA), in which a few involved scientists and engineers explain the motivation, is posted on YouTube (click here)

The two concepts (DART projectile and AIM orbiter) are developed as two self standing missions. Joining the two missions will allow performing an impact (DART) in order to deflect the smaller component of the asteroid binary system in October 2022 and observe the impact crater and derive collision and impact properties (AIM). 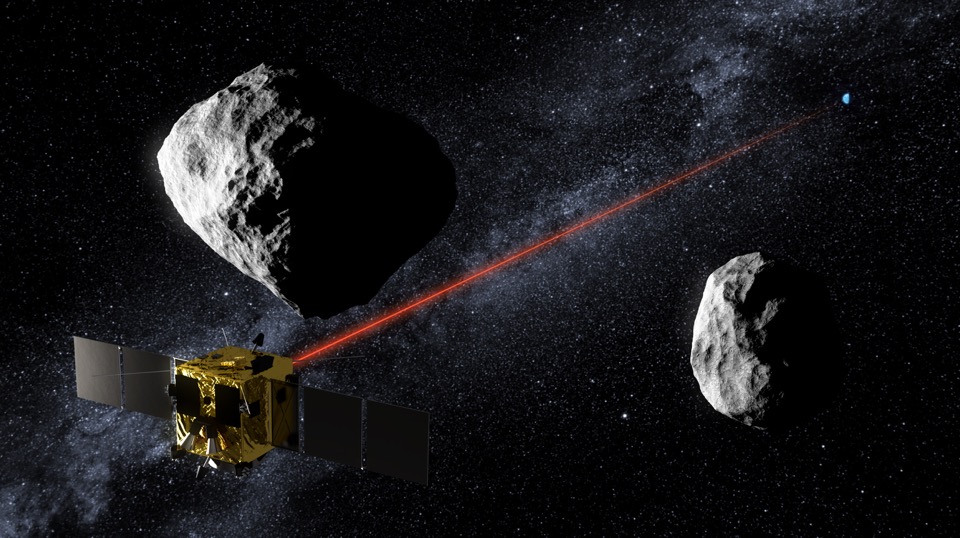 AIM is a rendezvous mission that focuses on the monitoring aspects i.e., the capability to determine in-situ the key properties of Didymos’ satellite used as the target of the deflection test. AIM will also give access to the detailed conditions of the DART impact and its outcome, allowing for the first time to get a complete picture of such an event, a better interpretation of the deflection measurement and a possibility to compare with numerical modeling predictions. Baseline payloads for AIM include the following remote sensing and in-situ instruments: a Visual Imaging System, a lander (based on DLR MASCOT heritage), a thermal infrared imager, a high frequency (decimeter-wave) radar, and a low frequency (60 MHz) radar, to measure Didymos surface and sub-surface physical properties and to study internal structures. AIM also includes an optical communication demonstration that can be used as a laser altimeter and CubeSat payloads.

AIM is not meant to be a purely scientific mission but rather a technology demonstration. However, AIM will improve drastically our scientific knowledge on small asteroids, in very relevant areas of Solar System science, such as asteroid geophysics, granular mechanics, impact processes, and thermal effects/properties.

The primary goals of DART are (i) to demonstrate a hypervelocity spacecraft impact on a small near-Earth asteroid (NEA) and (ii) to measure and understand the deflection caused by the impact.

The DART mission includes ground-based optical and radar-observing campaigns of Didymos both before and after the kinetic impact experiment, as well as modeling and simulation programs. DART has the further objective to learn how to mitigate an asteroid threat by kinetic impact and to develop and validate models for momentum transfer in asteroid impacts. AIM will further make detailed measurements of the DART impact and its outcome.

The DART and AIM missions, comprising AIDA, will return fundamental new information on a binary system, on its mechanical response, on the impact cratering process, and consequently on the collisional evolution of asteroids with implications for planetary defense, human spaceflight, and Solar System science. AIDA mission studies involve various scientific activities regarding binary dynamics and impact modeling, asteroid geophysics, observations. AIDA will be the first fully documented impact experiment at real asteroid scale, allowing numerical codes to be tested and used for similar and other scientific applications at those scales.