The goal of our project is to use the surface of the Moon as a large scale impact laboratory in order to study the collisions in our solar system. Unlike the ground impact laboratories that face limitations on the impact speeds that can be studied, the atmosphereless lunar surface suffers collisions up to 70 km/s. The impactors in these collisions are the meteoroids of small sizes (cm-dm), which belong to meteoroid streams or the background population and are of cometary or asteroidal origin. When meteoroids impact the Moon a small part of their kinetic energy transforms to luminous energy producing impact flashes that can be observed with ground-based telescopes.

We developed techniques for the identification of these luminous events in telescopic observations (Detection algorithm) and subsequently the lunar impact coordinates (AUGUR algorithm). Moreover, we developed methods of analysing the observed lunar impact events in order to link the impactors with a source meteoroid stream, estimate the impact speed as well as the mass and the size of the impactor.

The novelty of FLASH is the detection of the fresh craters that were produced by the observed lunar impact events (PyNAPLE algorithm). This allows to establish a link between the physical properties of the meteoroid impactor and its crater. For this we are building our dedicated observing facility in Nice. 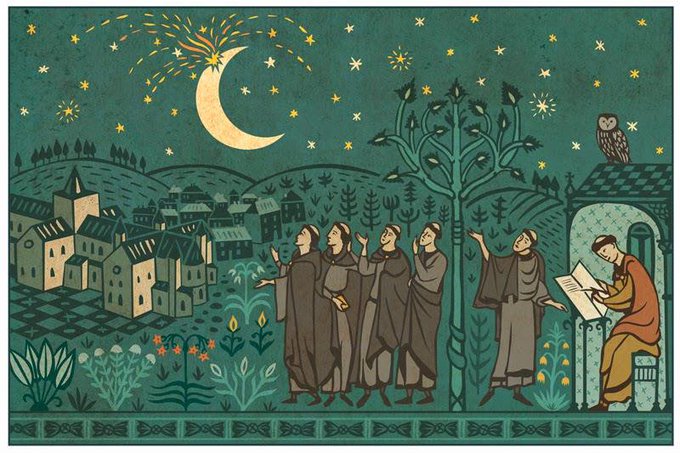 The Monk's Tail, Canterbury, June 18 1178: Five monks from the Canterbury Abbey reported that they saw a spectacular flash of light on the surface of the moon. The Canterbury chronicler, Fratello Gervase took the deposition of the five monks. In his chronicles Gervase wrote:

“This year on the 18th of June, when the Moon, a slim crescent, first became visible, a marvelous phenomenon was seen by several men who were watching it. Suddenly, the upper horn of the crescent was split in two. From the mid point of the division, a flaming torch sprang up, spewing out over a considerable distance fire, hot coals and sparks. The body of the Moon which was below, writhed like a wounded snake. This happened a dozen times or more, and when the Moon returned to normal, the whole crescent took on a blackish appearance.”

The monks sighting coincides with the Taurid meteor shower, which occurs in late June. Some astronomers theorize that there would be a discharge of molten matter from a meteoroid impact, which is consistent with the monks description of the event. Some even proposed that the formed crater after this event was the Giordano Bruno. However, the most logical scenario is that they happened to be at the right place at the right time to look up in the sky and see a meteor that was directly in front of the moon, coming straight towards them! In any case this event happened just eight centuries ago while Giordano Bruno crater most likely formed ~4 Myr ago!