Disk geometry and kinematics before the 2011 periastron

δ Scorpii is located in the Scorpius constellation, close to the luminous supergiant Antares. δ Sco is intriguing Astronomers since many decades because its brightness is regularly increasing by a factor 2.5 each 10 years. It is a massive star, with a mass of 14 times the solar mass and 8.5 times the sun radius. Moreover, it is a very fast rotating star, spinning at about 350 km/s (2 km/s for our sun), i.e. at about 70% of its “critical” velocity, where the matter can freely leave the stellar surface due to the centrifugal force.

In fact, δ Sco is already surrounded by an extended disk, which was formed by the matter previously ejected by the central star and producing the IR excess and emission lines observed in its spectrum. But its sudden brightness variations must be found elsewhere: δ Sco is in fact a binary star with a companion orbital period of 10 years, which will help the central star to loose its mass when approaching the primary (periastron passage) due to tidal effects, producing the observed brightness variations.

By using simultaneously the two largest interferometers in the world: the VLTI with its AMBER instrument in Chili and the CHARA interferometer and its VEGA instrument on Mt Wilson in the U.S., both instruments designed and built mainly by the Observatoire de la Côte d’Azur in France, we were able to measure with a very high spatial resolution, and for the first time, the disk size around the primary star at different wavelengths. We were thus able to study “in depth” the primary circumstellar disk, which was found to be like “Russian dolls”, i.e. with increasing sizes starting from 4.5 stellar radii (R*) in the Helium line, 5.5 R* in the Br γ line in the IR domain and 9 R* in the Hα line at visible wavelengths. We were also able to evidence that the disk was rotating following the Keplerian rotation (as the planets rotate in our solar system) and that its size has increased by a factor 1.3 between 2005 and 2007.

But the most spectacular phenomenon is to come since we have refined the orbit of the system and found that the companion is also a massive star, with a spectral type between B2V and B4V and that it will be at the closest distance from the primary nearly for the Independence Day (July, 4th 2011). At this date, the companion will be at a distance of 11 R* whereas the primary circumstellar disk size is 10 R* This temporary promiscuity will produce strong tidal effects at the origin of a Cosmic Firework which will be the source of the observed fast brightness variations and will last for many weeks. Thus, many Astronomers all around the world, including the VLTI and CHARA are already pointing their telescopes toward this very bright star (mv=2.2), i.e. observable by amateur Astonomers. Ready to observe ?


Classical Be stars are hot non-supergiant stars surrounded by a gaseous circumstellar disk that is responsible for the observed IR-excess and emission lines. The influence of binarity on these phenomena remains controversial.

δ Sco is a binary system whose primary suddently began to exhibit the Be phenomenon at the last periastron in 2000. We want to constrain the geometry and kinematics of its circumstellar environment.

We observed the star between 2007 and 2010 using spectrally-resolved interferometry with the VLTI/AMBER and CHARA/VEGA instruments.

As the star probably rotates at about 70% of its critical velocity the ejection of matter doesn’t seems to be dominated by rotation. However, the disk geometry and kinematics are similar to that of the previously studied quasi-critically rotating Be stars, namely α Ara, ψ Per and 48 Per. 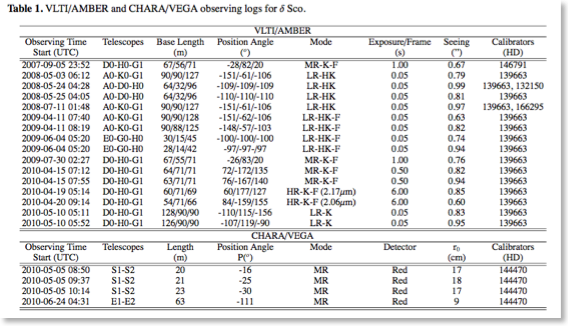 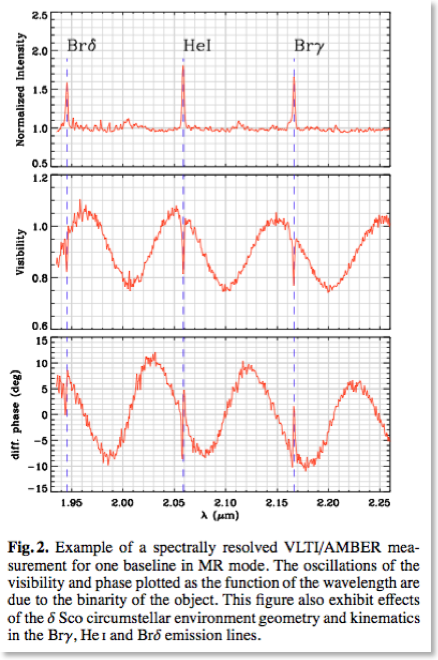 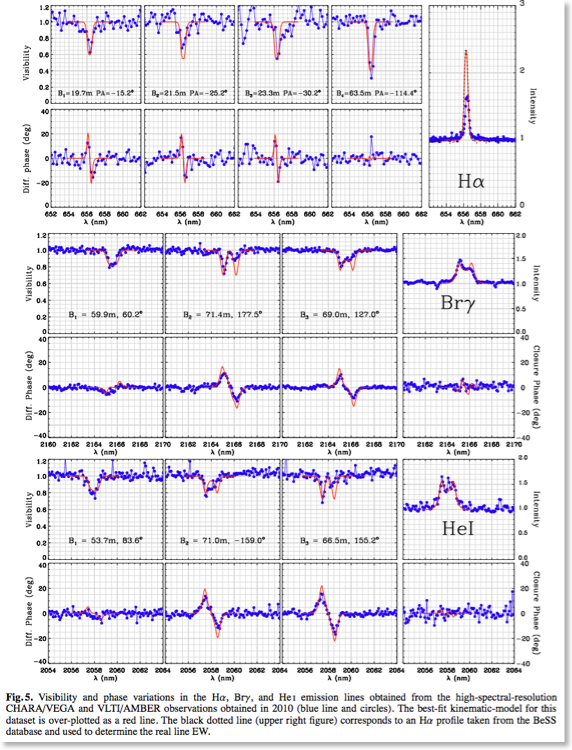 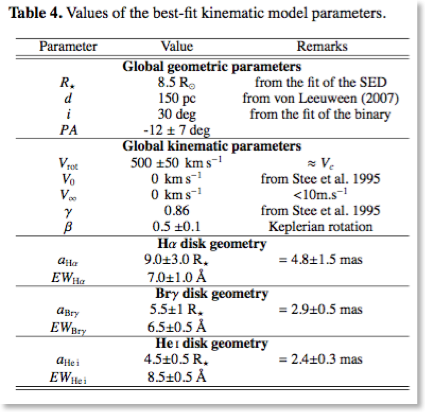 The binary Be star δ Scorpii at high spectral and spatial resolution
II. The circumstellar disk evolution after the periastron

Context. Classical Be stars are hot non-supergiant stars surrounded by a gaseous circumstellar disk that is responsible for the observed infrared (IR) excess and emission lines. The influence of binarity on these phenomena remains controversial.
Aims. We followed the evolution of the environment surrounding the binary Be star δ Scorpii one year before and one year after the 2011 periastron to check for any evidence of a strong interaction between its companion and the primary circumstellar disk. Methods. We used the VLTI/AMBER spectro-interferometric instrument operating in the K band in high (12 000) spectral resolution to obtain information on both the disk geometry and kinematics. Observations were carried out in two emission lines: Brγ (2.172 μm) and He i (2.056 μm).
Results. We detected some important changes in δ Scorpii’s circumstellar disk geometry between the first observation made in April 2010 and the new observation made in June 2012. During the last two years the disk has grown at a mean velocity of 0.2 km s−1 . This is compatible with the expansion velocity previously found during the 2001−2007 period. The disk was also found to be asym- metric at both epochs, but with a different morphology in 2010 and 2012.
Conclusions. Considering the available spectroscopic data showing that the main changes in the emission-line profiles occurred quickly during the periastron, it is probable that the differences between the 2010 and 2012 disk geometry seen in our interferometric data stem from a disk perturbation caused by the companion tidal effects. However, taking into account that no significant changes have occurred in the disk since the end of the 2011 observing season, it is difficult to understand how this induced inhomogeneity has been “frozen” in the disk for such a long period. 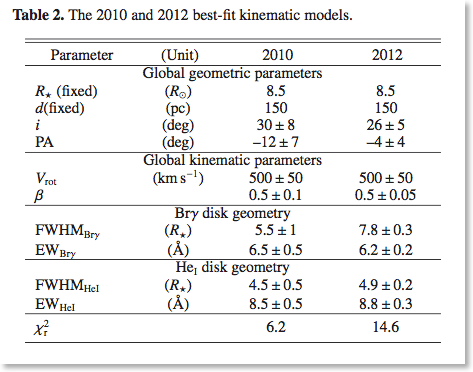 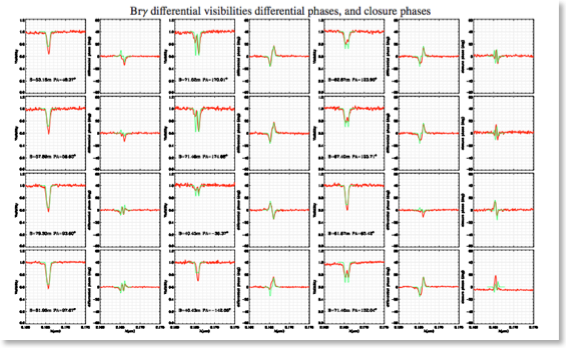 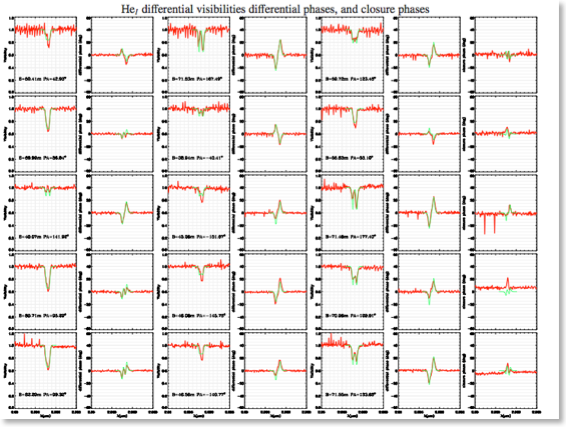