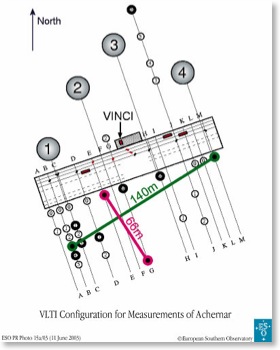 Observations with the VLT Interferometer (VLTI) at the ESO Paranal Observatory have allowed to obtain by far the most detailed view of the general shape of the fast-spinning hot star Achernar (Alpha Eridani), the brightest in the southern constellation Eridanus (The River).They find that Achernar is much flatter than expected - its equatorial radius is more than 50% larger than the polar one! In other words, this star is shaped very much like the well-known spinning-top toy, so popular among young children. 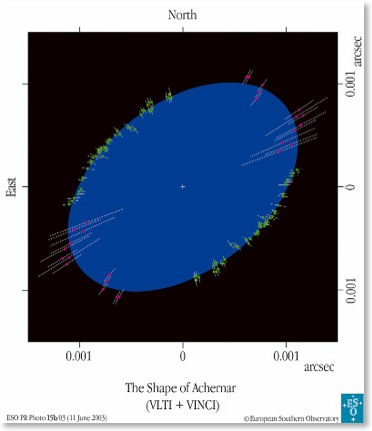 VINCI measurements of the spinning-top Be star Achernar.

The high degree of flattening measured for Achernar - a first in observational astrophysics - now poses an unprecedented challenge for theoretical astrophysics. The effect cannot be reproduced by common models of stellar interiors unless certain phenomena are incorporated, e.g. meridional circulation on the surface ("north-south streams") and non-uniform rotation at different depths inside the star. All the story is presented as a ESO Press Release HERE. The paper describing this very nice result is published in A&A, 407, L47 (2003)

We use spectral energy distributions (SEDs), Hα line profiles, and visibilities available in the literature to study Achernar’s envelope geometry and to propose a possible scenario for its circumstellar disk formation and dissipation. We use the SIMECA code to investigate possible geometries of the circumstellar environment by comparing our synthetic results with spectroscopic and high angular resolution data from the VLTI/VINCI instrument. We compute three different kinds of models: an equatorial disk, a polar wind, and a disk+wind model.

We develop a 2D axial symmetric kinematic model to study the variation of the observed Hα line proﬁles, which provides clear evidence of Achernar’s equatorial disk formation and dissipation between 1991 and 2002. Our model can reproduce the polar-wind extension greater than 10 R* and a possible equatorial disk ( ≤5 R*) but we were unable to estimate the wind opening angle. We reproduce the Hα line-profile variations using an outburst scenario, but the disk final contraction requieres an additional physical effect to be taken into account. The polar stellar wind does not appear to be linked to the presence of a disk or a ring around the star. We test the possibility of a binary companion to Achernar, as found by Kervella & Domiciano de Souza (2007, A&A, 474, L49), but conclude that the VLTI/VINCI visibilities cannot be explained by a rotationally-distorted Be star and a companion alone. The presence of a polar jet provides an important component to reproduce the observations even if it is not excluded that the companion could partially influence the observations. New interferometric observations at short baselines (5 ≤ B ≤ 20 m) are mandatory to constrain Achernar’s circumstellar envelope, as well as spectroscopic long-term follow-up observational programs to link Achernar’s mass-loss episodes with its circumstellar disk formation. 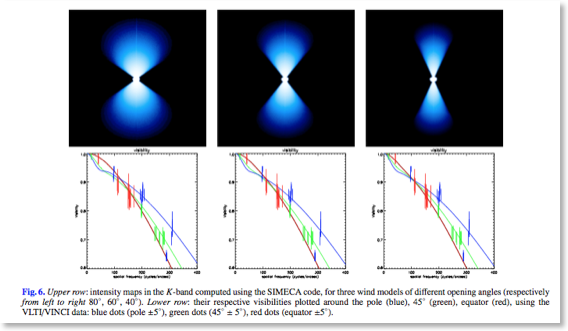 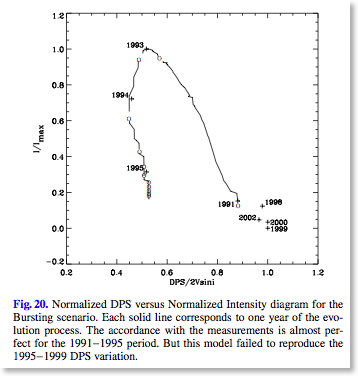 As is the case of several other Be stars, Achernar is surrounded by an envelope, recently detected by near-IR interferometry.

We have searched for the signature of circumstellar emission at distances of a few stellar radii from Achernar, in the thermal IR domain.

We have obtained interferometric observations on three VLTI baselines in the N band (8-13 μm), using the MIDI instrument.

From the measured visibilities, we derive the angular extension and flux contribution of the N band circumstellar emission in the polar direction of Achernar. The interferometrically resolved polar envelope contributes 13.4 ± 2.5% of the photospheric flux in the N band, with a full width at half maximum of 9.9 ± 2.3 mas (≈6 R_star). This flux contribution is in good agreement with the photometric IR excess of 10-20% measured by fitting the spectral energy distribution. Due to our limited azimuth coverage, we can only establish an upper limit of 5-10% for the equatorial envelope. We compare the observed properties of the envelope with an existing model of this star computed with the SIMECA code.

The observed extended emission in the thermal IR along the polar direction of Achernar is well reproduced by the existing SIMECA model. Already detected at 2.2 μm, this polar envelope is most probably an observational signature of the fast wind ejected by the hot polar caps of the star. 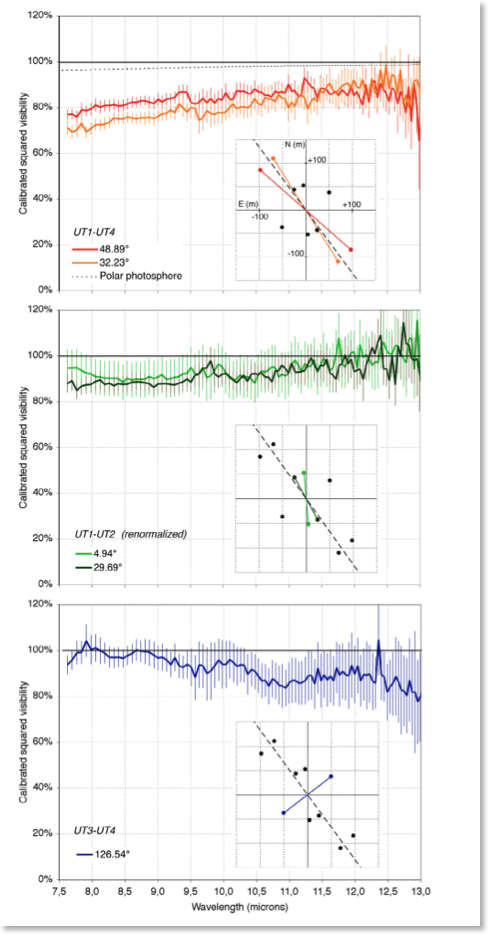 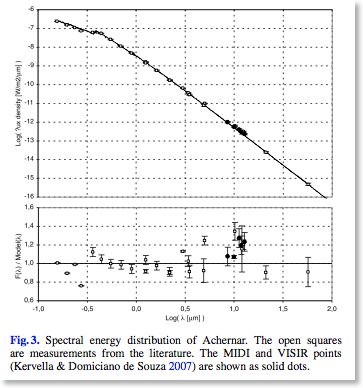