We have presented the first VLTI/MIDI observations of the Be star α Arae, showing a nearly unresolved circumstellar disk in the N band. The interferometric measurements made use of the UT1 and UT3 telescopes. The projected baselines were 102 and 74 meters with position angles of 7° and 55°, respectively.

These measurements put an upper limit to the envelope size in the N band under the Uniform disk approximation of Φmax = 4±1.5 mas, corresponding to 14 R* assuming R*= 4.8 Ro and the Hipparcos distance of 74 pc. On the other hand the disk density must be large enough to produce the observed strong Balmer line emission. In order to estimate the possible circumstellar and stellar parameters we have used the SIMECA code developed by Stee (1995) and Stee & Bittar (2001). Optical spectra taken with the´echelle instrument Heros and the ESO-50cm telescope, as well as infrared ones from the 1.6m Brazilian telescope have been used together with the MIDI spectra and visibilities. These observations put complementary constraints on the density and geometry of α Arae circumstellar disk. We discuss on the potential truncation of the disk by a companion and we present spectroscopic indications of a periodic perturbation of some Balmer lines. 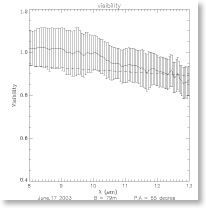 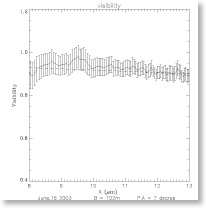 VLTI/MIDI data for the 79 m (left) and 102 m (right) baselines and theoretical visibilities from SIMECA (dashed line) for a truncated disk at 22 R* by a possible companion. The error bars are equivalent to one sigma. 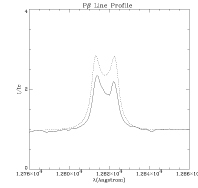 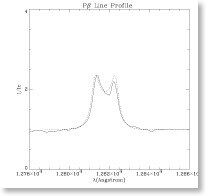 Observed Paβ line profile (mid-2003, solid line) compared to the modeled one based on the parameters determined by the fit of the 1999 Hα and Hβ line profiles (dotted line). Right: Observed Paβ line profile (solid line) and the best fit from the SIMECA code (dotted line). To compensate for the effects of non-simultaneous observations, the density of the disk was allowed to vary in a small range. This fit has been obtained with a disk density lower by 25% compared to the best model based on 1999 Hα and Hβ lines.

Until now, no evidence has been reported for a possible companion around α Ara, but it should be kept in mind that it is difficult to search for low mass companions around bright stars, such as Be stars (see for instance the case of γ Cas, Harmanec et al. 2000; Miroshnichenko, Bjorkman, & Krugov 2002, period P∼204 d). The X-ray flux from α Ara is not peculiar and similar to that of normal B stars (LX=3.75 10 28 erg s−1, assuming d=122pc, Cohen et al. 1998). The proposed truncation may also help to explain the stringent non detection of radio emission from α Ara at a level of 0.1 mJy at 3.5cm and 6.3cm (Steele et al. 1998). Using the NPOI interferometer, Tycner et al. (2004 )have recently studied the disk geometry of the Be star ζ Tau, which is also a well-investigated spectroscopic binary (P∼133d, K∼10 kms −1). They measured the disk extension quite accurately to be well within the Roche radius. This suggests also that this disk may be truncated.

An announcement was made by the French "Institut National des Sciences de l'Univers" (INSU) an can be found HERE (in French, sorry) 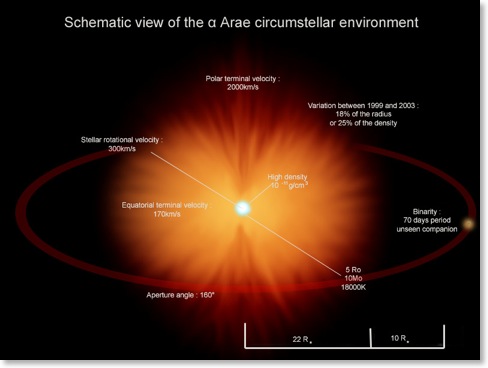 YES: the rotation within Be circumstellar disks is KEPLERIAN !

Thanks to these first spectrally resolved interferometric measurements of a Be star at 2 μm we were able to propose a possible scenario for the Be star Arae’s circumstellar environment which consist in a thin disk + polar enhanced winds that is successfully modeled with the SIMECA code.

- We found that the disk around α Arae is compatible with a dense equatorial matter confined in the central region whereas a polar wind is contributing along the rotational axis of the central star. Between these two regions the density must be low enough to reproduce the large visibility modulus (small extension) obtained for two of the four VLTI baselines. This new scenario is also compatible with the previous MIDI measurements and the fact that the outer part of the disk may be truncated by a unseen companion at 32 R* .

- We obtain for the first time the clear evidence that the disk is in Keplerian rotation, closing a debate that occurs since the discovery of the first Be star γ Cas by father Secchi in 1866.

- We found that that α Arae must be rotating very close to its critical velocity. 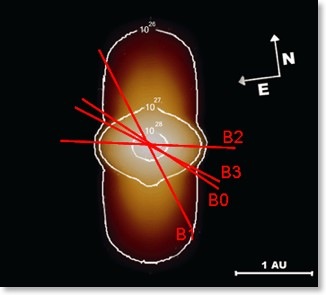 Intensity map in the continuum at 2.15 μm obtained with SIMECA for our best model parameters.
The inclination angle is 55° , the central bright region is the flux contribution from the thin equatorial disk whereas the smoother regions originate from the stellar wind. The brightness contrast between the disk and the wind is globally ∼ 30 but can reach 100 if you compare the inner region of the disk with the outer parts of the wind. The red lines are the projected VLTI baselines used. 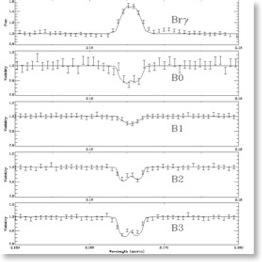 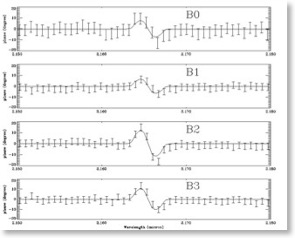 α Arae differential visibilities (left) and phases (right) across the Brγ line profiles for the B0 , B1 , B2 and B3 baselines. The plain line are the fits we obtain with SIMECA from the model 3 whereas the VLTI/AMBER data are the points with error bars. 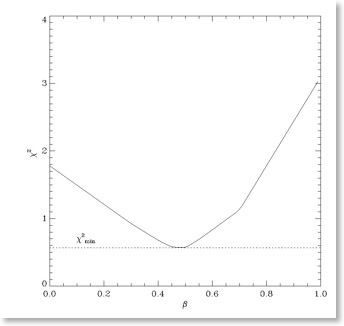 χ2 from our models and the AMBER data plotted as a function of the β parameter.χ 2 min is the minimum value obtained for a model with β=0.48 which is very close to the Keplerian rotation (β=0.5). 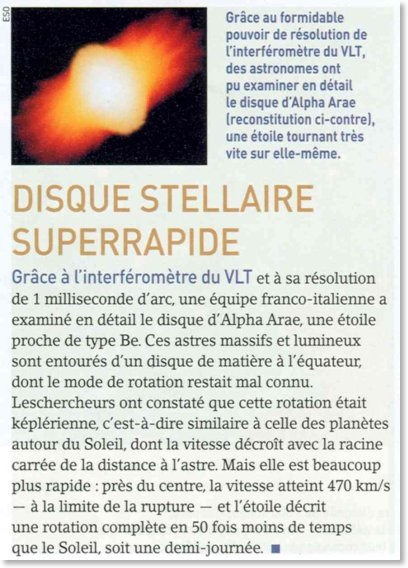