The variability in Be stars can be of three orders:

This variability is on the order of a few minutes, hours up to few days. You can see it by observing changes in the photospheric lines shape. The origin of these changes is not yet completely clear. Is it due to Non-Radial oscillations of the stellar photosphere or to spots on the stellar surface modulated by the rotation of the star appearing and disappearing time to time ? I have participated in one of the studies on short term variability during the MUSICOS Campain. For more details see: A.M. Hubert, M. Floquet, J.X. Hao, S. Caillet, C. Catala et al. and Stee, Ph. 1997, "Rapid photospheric variability in the Be star 48 Per from the MUSICOS 1989 campaign", A&A, 324, 929

Observing the Be shell star z Tau on October 93, Vakili et al. 1998 found that a high density pattern occurs around a radial velocity of +130 km/s and has a north-south projection position of 0.7 mas to the south of the continuum source (i.e at 3.6 R*). For October 94, this density pattern has rotate prograde and occurs at  a radial velocity of -70 km/s. It is now located at 0.5 mas to the north of the contiuum source which corresponds to 2.6 R*. These observations are the first detection of  an axi-asymmetric envelope around a Be star that is interpretnvelope around a Be star that is interpreted as a direct evidence for a prograde one-armed oscillation of its equatorial disk (see following figure for a schematic representation of z Tau Hα long term variability). 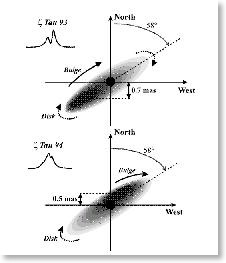 After z Tau, γ Cas is the second Be star for which interferometric observations directly evidence a prograde one-armed oscillations of its equatorial disk (see following picture).

This prograde precesssion agrees with the Okazaki's model (Okazaki 1997) of the one-armed (m=1) oscillation confined by the radiative effect. In their paper on γ Cas Berio et al. 1999 have investigated the possibility of such oscillation to occur within the equatorial regions of a latitude  dependent radiative wind model (SIMECA) developed by Stee & Araujo (1994). In this model, the star is distorted due to itshigh rotation. The centrifugal force makes the effective gravity and the brightness temperature decrease from pole to equator and thus the corresponding radiative force will depend on the stellar latitude. Finally the star has a highly ionized fast wind in the polar regions and a slow wind of low ionization, with a higher density near the equator. In the inner (< 10R*), cool, dense equatorial regions the kinematics is dominated by the Keplerian rotation, the radiative wind is due to optically thin lines where the one-armed oscillations develop. The global period of the oscillation remains about 7 years, which is consistent with the meanvalue found by Hirata & Hubert-Delplace 1981 from spectroscopic observations.

It is observed through important changes in photometry, spectroscopy, plarimetry and morphology. The time scale of these changes is on the order of few decades. Several correlations were obtained between these changes. For instance the correlation between the Hα emission line equivalent width and the intrinsic polarization of the star. Nevertheless there is no explanation on how the same star can go through B-Be-Be Shell stages.