Unveiling the structure of the disks around intermediate-mass pre-main-sequence stars (Herbig Ae/Be stars) is essential for our understanding of the star and planet formation process. In particular, models predict that in the innermost AU around the star, the dust disk forms a “puffed-up” inner rim, which should result in a strongly asymmetric brightness distribution for disks seen under intermediate inclination.

Our aim is to constrain the sub-AU geometry of the inner disk around the Herbig Ae star R CrA and search for the predicted asymmetries.

In the derived visibility function, we detect the signatures of an extended (Gaussian FWHM ∼ 25 mas) and a compact component (Gaussian FWHM ∼ 5.8 mas), with the compact component contributing about two-thirds of the total flux(both in H- and K-band). The brightness distribution is highly asymmetric, as indicated by the strong closure phases (up to ∼ 40°) and the detected position angle dependence of the visibilities and closure phases. To interpret these asymmetries, we employ various geometric as well as physical models, including a binary model, a skewed ring model, and a puﬀed-up inner rim model with a vertical or curved rim shape. For the binary and vertical rim model, no acceptable fits could be obtained. On the other hand, the skewed ring model and the curved puffed-up inner rim model allow us to simultaneously reproduce the measured visibilities and closure phases. From these models we derive the location of the dust sublimation radius ( ∼ 0.4 AU), the disk inclination angle (∼ 35°), and a north-southern disk orientation (PA ∼180-190°). Our curved puffed-up rim model can reasonably well reproduce the interferometric observables and the SED simultaneously and suggests a luminosity of ∼ 29 L_sun and the presence of relatively large ( > 1.2 µm) Silicate dust grains. Our study reveals also signiﬁcant deviations between the measured interferometric observables and the employed puffed-up inner rim model, providing important constraints for future reﬁnements of these theoretical models. Perpendicular to the disk, two bow shock-like structure appear in the associated reflection nebula NGC 6729, suggesting that the detected sub-AU size disk is the driving engine of a large-scale outflow.

Detecting, for the ﬁrst time, strong non-localized asymmetries in the inner regions of a Herbig Ae disk, our study supports the existence of a pued-up inner rim in YSO disks. 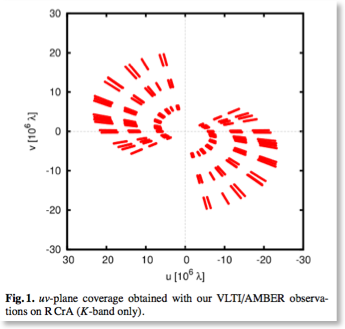 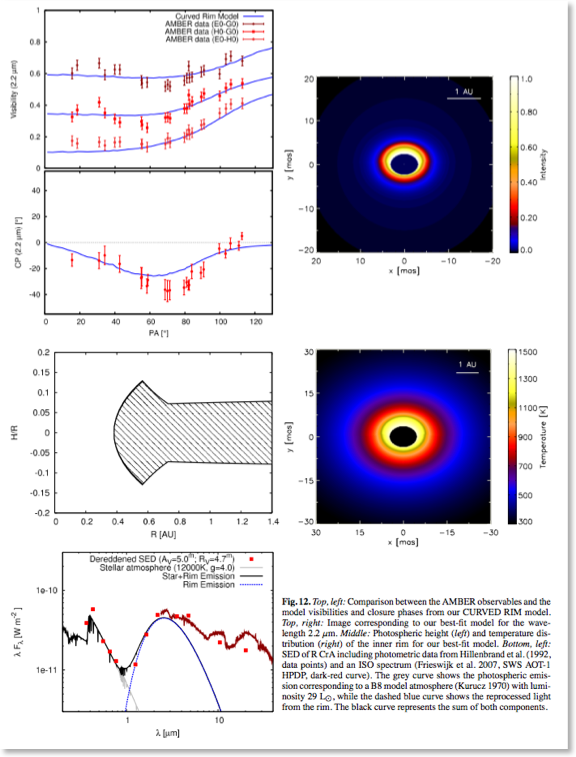 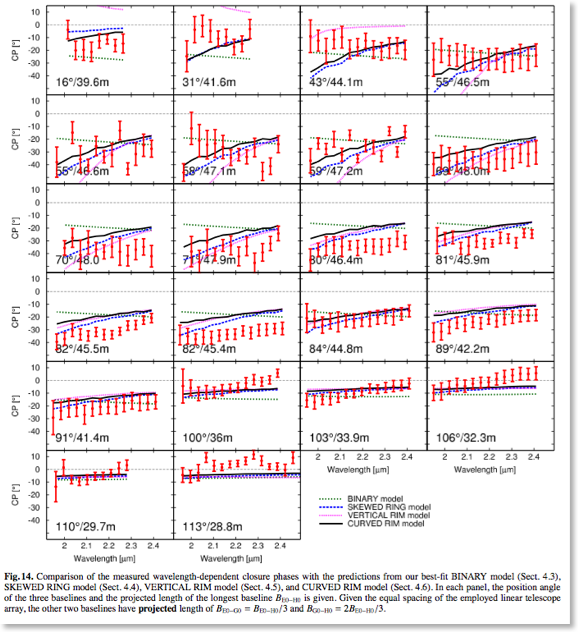