Concentration and dispersion of particulate pollutants 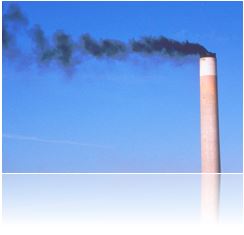 The tools used by the organizations in charge of predicting the air quality are designed to estimate average fields and do not quantify the amplitude of fluctuations. The neighborhood impact of sources of air toxics is generally evaluated using a combination of Gaussian models for dispersion and of half-empirical techniques. However, in some situations, unwanted local concentrations presenting health hazards win over turbulent diffusion. Quantifying fluctuations to identify situations where mean-field approaches fail is hence an important and challenging issue.

The goal is here to give a precise and systematic description of three general mechanisms that have been identified as provoking large fluctuations of concentration.

Nature of the turbulent flow

It was observed that the distribution of a passive scalar advected by a turbulent flow displays tails that are much fatter than Gaussian. However the functional form of such tails does not seem universal but could depend on the flow details (mean shear, isotropy, homogeneity, etc.). The goal will be here to identify the flow characteristics favoring or impeding extreme concentrations.

Some pollutants are so massive that size and mass effects play an important role in their dynamics. It is for instance the case of particles labeled as PM2.5 and PM10, which are mostly coming from the combustion of petroleum products and can have important effects on health. Such particles are typically ejected from the eddies of the turbulent flow and concentrate in strain-dominated regions; this results in a broadening of the probability tails at large concentrations. It is proposed to quantify the importance of such inertial mechanisms as a function of the nature of the particles.

Nature of the source

The downwind concentration of pollutants is markedly affected by the injection details. A description of the particle spatial distribution requires determining the amalgam between plum growth driven by turbulent eddies smaller than the puff and dispersion caused by meandering. The respective weight of these two effects is sensitive to source parameters such as its size and its spatial extent (point-like to caricature a stack, extended in one direction to mimic a road, or in two for forest fires or dust storms), its time behavior (instantaneous or continuous), or its distance to the ground. It is intended here to develop new tools that will provide a unified description of cases that, up to now, were mostly described in specific settings.