The early days of the Milky Way revealed

A study by an international team, with the participation of two French researchers from the Laboratoire Lagrange (UCA, OCA, CNRS), associates a temporal sequence to the events which gave rise to our Galaxy.

The universe 13,000 million years ago was very different from the universe we know today. It is understood that stars were forming at a very rapid rate, forming the first dwarf galaxies, whose mergers gave rise to the more massive present-day galaxies, including our own. However the exact chain of the events which produced the Milky way was not known until now.
Exact measurements of position, brightness and distance for around a million stars of our galaxy within 6,500 light years of the sun, obtained with the Gaia space telescope, have allowed a team from the IAC to reveal some of its early stages. «We have analyzed, and compared with theoretical models, the distribution of colours and magnitudes (brightnesses) of the stars in the Milky Way, splitting them into several components; the so-called stellar halo ( a spherical structure which surrounds spiral galaxies) and the thick disc (stars forming the disc of our Galaxy, but occupying a certain height range)», explains Carme Gallact, a researcher at the IAC and the first author of this article, which is published today in the journal Nature Astronomy. 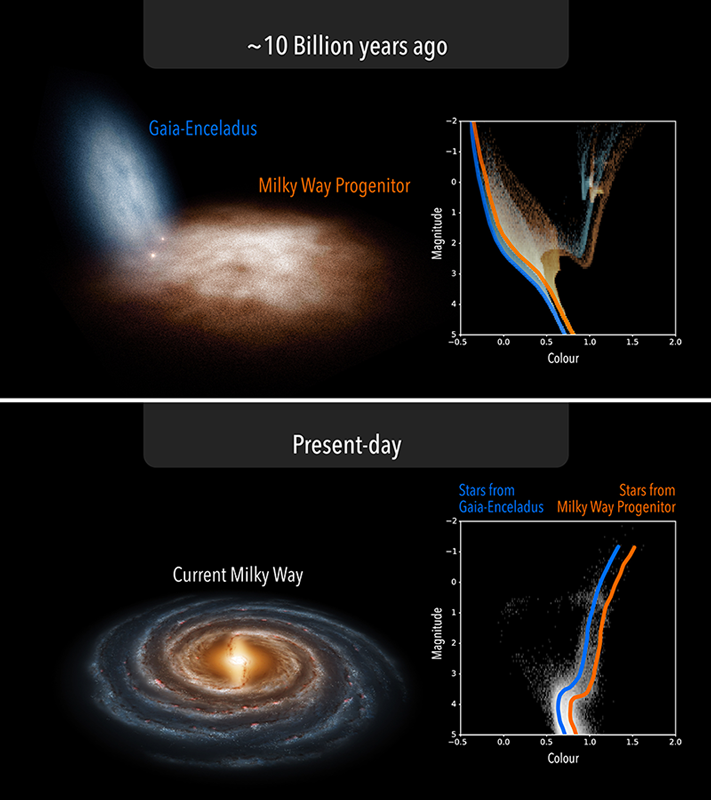 Previous studies had discovered that the Galactic halo showed clear signs of being made up of two distinct stellar components, one dominated by bluer stars than the other. The movement of the stars in the blue component quickly allowed us to idenfy it as the remains of a dwarf galaxy (Galia-Enceladus) which impacted onto the early Milky Way. However the nature of the red population, and the epoch of the merger between Gaia-Enceladus and our Galaxy were unknown until now. Analyzing the data from Gaia has allowed to obtain the distribution of the ages of the stars in both components and has shown that the two comprise equally old stars, which are older than those of the thick disc. But if both components were formed at the same time, what differentiates one from the other? The final piece of the puzzle was given by the quantity of «metals» (elements which are not hydrogen or helium) in the stars of each component or the other: the stars in the blue component have a smaller quantity of metals than those of the red component. These findings, with the addition of the predictions of simulations which are also analyzed in the article, have allowed the researchers to complete the history of the formation of the Milky Way.

Thirteen thousand million years ago stars began to form in two different stellar systems which then merged: one was a dwarf galaxy which we knwo of as Gaia-Enceladus, and the other was the main progenitor of our Galaxy, some four times more massive and with a larger proportion of metals. Some ten thousand million years ago there was a violent collision between the more massive system and Gaia-Enceladus. As a result some of its stars, and those of Gaia-Enceladus, were set into chaotic motion, and eventually formed the halo of the present Milky Way. After that there were violent bursts of star formation until 6,000 million years ago, when the gas settled into the disc of the Galaxy, and produced what we know as the «thin disc».