The moons of planets that have no parent star can possess an atmosphere and retain liquid water. Astrophysicists from Ludwig Maximilian University of Munich, University of Concepción in Chile, Lagrange Laboratory, and University of Tokyo have calculated that such systems could harbor sufficient water to make life possible – and sustain it. 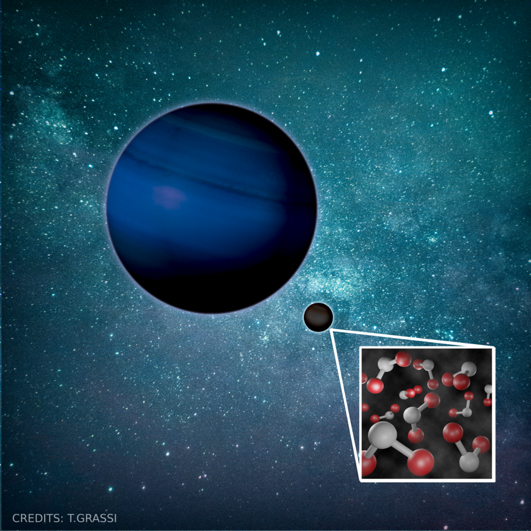 Water – in liquid form – is the elixir of life. It made life possible on Earth and is indispensable for the continuing existence of living systems on the planet. This explains why scientists are constantly on the lookout for evidence of water on other solid bodies in the Universe. Up to now, however, the existence of liquid water on planets other than Earth has not been directly proven. However, there are indications that several moons in the outer reaches of our own solar system – more specifically, Saturn’s Enceladus and three of Jupiter’s moons (Ganymede, Callisto and Europa) may possess subterranean oceans. What then are the prospects for the detection of water on the moons of planets beyond our solar system ?

The collaboration, that include Andrea Chiavassa from Lagrange Laboratory at the Observatoire de la Côte d’Azur, have used mathematical methods to model the atmosphere and gas-phase chemistry of a moon in orbit around a free-floating planet (FFP). A FFP is a planet that is not associated with a star.

FFPs are of interest mainly because the evidence indicates that there are plenty of them out there. Conservative estimates suggest that our own galaxy hosts at least as many Jupiter-sized orphan planets as there are stars – and the Milky Way itself is home to well over 100 billion stars.

The authors made use of a computer model to simulate the thermal structure of the atmosphere of an exomoon of the same size as the Earth in orbit around a FFP. Their results suggest that the amount of water present on the moon’s surface would be about 10,000 times smaller than the total volume of our planet’s oceans, but 100 times larger than that found in Earth’s atmosphere. This would be enough to enable life to evolve and thrive.

The model from which this estimate was derived consists of an Earth-sized moon and a Jupiter-sized FFP. Such a system, which has no stellar companion nearby, is expected to be dark and cold. Unlike our solar system, there is no central star that can serve as a reliable source of energy to drive chemical reactions.

Cosmic radiation and tidal forces to the fore !

Rather, in the researchers' model, cosmic rays provide the chemical drive necessary to convert molecular hydrogen and carbon dioxide into water and other products. To keep the system stirred up, the authors invoke the tidal forces exerted by the planet on its moon as a source of heat – and assuming that carbon dioxide accounts for 90% of the moon’s atmosphere, the resulting greenhouse effect would effectively retain a large part of the heat generated on the moon. Together, these energy sources would suffice to keep water in the liquid state.