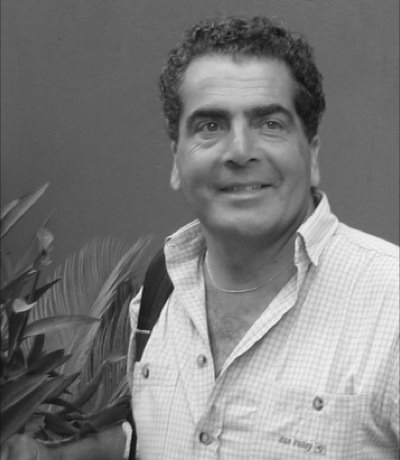 Comparative planetology studies are key for understanding the main processes driving planetary formation and evolution. None have been yet applied to pristine asteroids formed in the solar protoplanetary disk, mainly because of their comminution during their 4.5- billion-year collisional lifetime. From remarkable textural, mineralogical,chemical, and thermodynamic similarities, we show that the hightemperature Kudryavy volcano fumarolic environment from Kurile Islands (Fig. 1) is a likely proxy of the Fe-alkali-halogen metasomatism on the CV and CO carbonaceous chondrite parent bodies (Fig. 2). Ca-Fe–rich and Na-Al-Cl–rich secondary silicates in CV and CO chondrites are, thus, inferred to be fumarolic-like incrustations that precipitate from hot and reduced hydrothermal vapors after interactions with the wallrocks during buoyancy-driven Darcy flow percolation. These vapors may originate from the progressive heating and devolatilization of a chondritic protolith on their parent body or are remnant of the cooling of residual local nebular gases at the time of their primary planetesimal accretion. 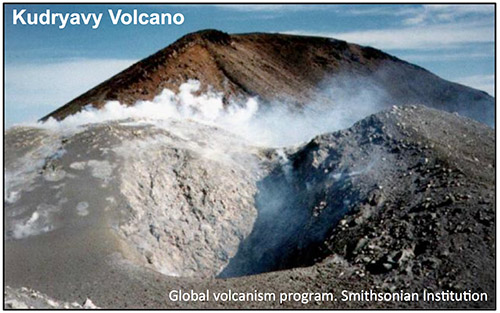 Fig 1. I discovered the analogy between fumarolic incrustations of Kudryavy rocks (here the Kudryavy volcano from Iturup island in the Kurile volcanic arc) and secondary phases of carbonaceous chondrites that inspired this article. 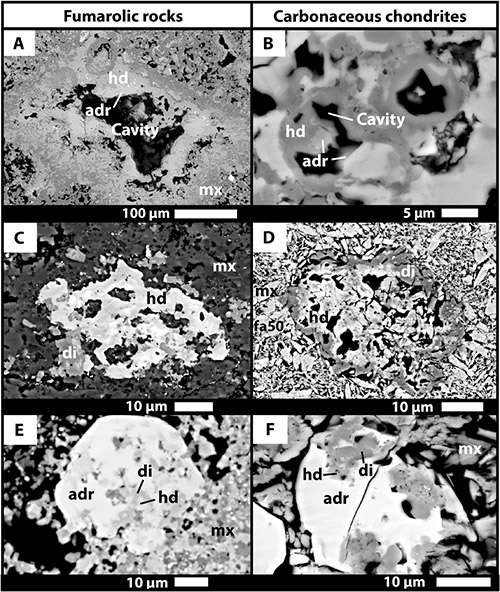 Fig 2. BSE-SEM observation of hightemperature fumarolic incrustations from Kudryavy and secondary minerals in CV chondrites. Notice the striking similarity between the two settings. 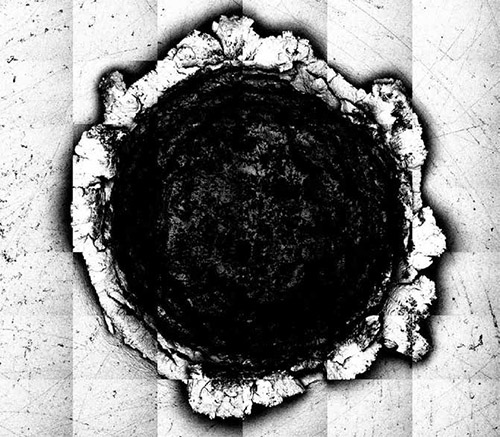 Several arguments point to a larger proportion of metal-rich asteroids than that derived from spectral observations, as remnants of collisional disruptions of differentiated bodies. We show using hypervelocity impact experiments, made at Institute of Space and Astronautical Science (JAXA), that this apparent deficit may result from the coating of metallic surfaces by silicate melts produced during impacts of hydrated or dry projectiles at typical asteroid impact speeds (≈km.s-1). Spectral analysis of steel and iron meteorite targets after impact shows a profoundly modified optical signature. Furthermore, hydrated projectiles leave a 3-μm absorption hydration feature. This feature is thus consistent with a metallic surface and does not require an unusual low-speed impact. Unless systematizing radar measurements, ground-based spectral observations can be deceptive in identifying iron-rich bodies. The NASA Psyche mission rendezvous with Psyche will offer the unique opportunity both to measure the relative abundances of regolith and glassy coated surfaces and to substantially increase our understanding of impact processes and signatures on a metal-rich asteroid.

Fig 1 & 2 : a) Hypervelocity impact crater (6.9 km/s;1899J), b) X-ray map (Al, green; Fe, blue; Si, red) showing the coating over the entire surface of the bowl shape crater, and c) Normalized reflectance VISNIR spectra of the craters produced in this study compared to observation of probable metal-rich asteroid (including 16 Psyche) as well as metal-related spectral end-members.

Chondrules, millimeter-sized igneous spherules comprising the major component of most chondritic meteorites, formed during the first 4-5 million years of the evolution of the solar protoplanetary disk and, therefore, can potentially offer important constraints on the conditions in the disk, provided that the processes that led to their formation can be understood. Highresolution cathodoluminescence survey of chondrules from ordinary and carbonaceous chondrite groups
revealed changes of CL activator concentrations of magnesium-rich olivines. We show that these overlooked internal zoning structures provide evidence for high-temperature gas-assisted near-equilibrium epitaxial growth of olivines during chondrule formation. We argue that this interaction with the surrounding gas, rather than various cooling histories, defined chondrule composition and texture. Chondrules are thus direct thermochemical sensors of their high-temperature gaseous environment, an high partial pressures of gaseous Mg and SiO are required in their solar protoplanetary disk-forming region to maintain olivine saturation in
chondrules. The inferred crystallization of olivines, from stable melts approaching equilibrium with the surrounding gas, provides an explanation for the notable absence of large and systematic isotopic fractionations in chondrules. 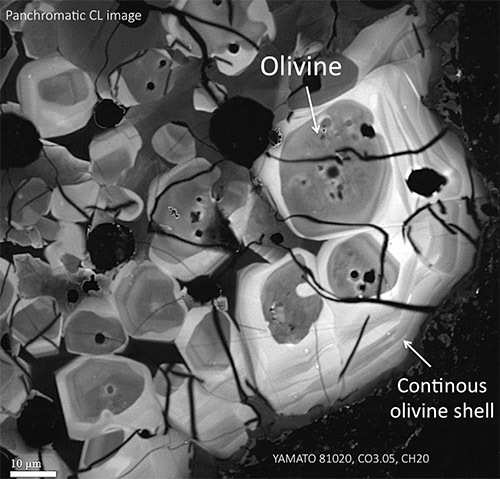 Thermal fatigue as the origin of regolith on small asteroids

Space missions and thermal infrared observations have shown that small asteroids (kilometre-sized or smaller) are covered by a layer of centimetresized or smaller particles, which constitute the regolith. Regolith generation has traditionally been attributed to the fall back of impact ejecta and by the break-up of boulders by micrometeoroid impact. Laboratory experiments and impact models, however, show that crater ejecta velocities are typically greater than several tens of centimetres per second,which corresponds to the gravitational escape velocity of kilometre-sized asteroids. Therefore, impact debris cannot be the main source of regolith on small asteroids. In this paper we report that thermal fatigue, a mechanism of rock weathering and fragmentation with no subsequent ejection, is the dominant process governing regolith generation on small asteroids. We find that thermal fragmentation induced by the diurnal temperature variations breaks up rocks larger than a few centimetres more quickly than do micrometeoroid impacts. Because thermal fragmentation is independent of asteroid size, this process can also contribute to regolith production on larger asteroids. Production of fresh regolith originating in thermal fatigue fragmentation may be an important process for the rejuvenation of the surfaces of near-Earth asteroids, and may explain the observed lack of low-perihelion, carbonaceous near-Earth asteroids. 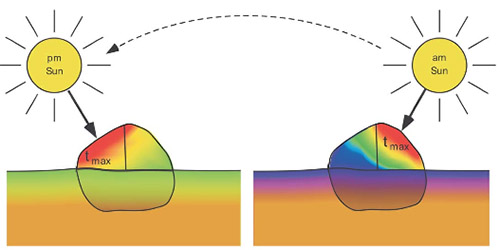 Fig. 2. Schematic of the surface layer of rocks modelled in this paper. The rocks are subjected to spatial and temporal temperature gradients at the surface of the asteroid due to changes in the diurnal solar heating, which induce thermal fatigue crack growth.

Models of the evolution of the early solar system rely on knowledge of the precise time scales for the physical and chemical processes that occurred in the early accretion disk and led to the formation of calcium- and aluminum- rich inclusions (CAIs) and chondrules, which are the building blocks of primitive meteorites (chondrites). The timing of the formation of the first solids in the solar system remains poorly constrained. Micrometerscale, high-precision magnesium
(Mg) isotopic analyses demonstrate that Earth, refractory inclusions, and chondrules from primitive meteorites formed from a reservoir
in which short-lived aluminum-26 (26Al) and Mg isotopes were homogeneously distributed at ±10%. This level of homogeneity validates the use of 26Al as a precise chronometer for early solar system events. Highprecision chondrule 26Al isochrons show that several distinct chondrule melting events took place from ~1.2 million years (My) to ~4 My after the first solids condensed from the solar nebula, with peaks between ~1.5 and ~3 My, and that chondrule precursors formed as early as 0.87 My after. 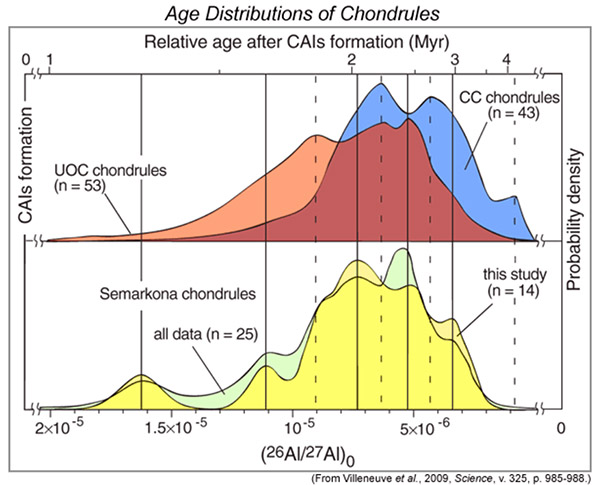 Fig. 1. Initial 26Al /27Al and its corresponding relative age (top axis) for Semarkona chondrules (bottom) and chondrules in other unequilibrated ordinary chondrites (UOC) and carbonaceous chondrites (CC). The vertical solid lines represent peaks in the Semarkona distributions; dashed lines represent peaks in the UOC and CC distribution. Each peak might represent an up tick in chondrule production, or the peaks might reflect the efficiency of chondrules preservation.