First discovery of an exoplanet by SPHERE

The astronomical instrument SPHERE, installed since 2014 on the Very Large Telescope (VLT) of the European Southern Observatory (ESO) in Chile, has made its first discovery of a planet around a star other than the Sun, known as an exoplanet. Only a handful of the 3,600 exoplanets detected since 1995 have been observed directly in this way. With a mass between 6 and 12 times that of Jupiter, HIP65426b is a young massive planet orbiting around a bright star in rapid rotation, located in the Scorpius-Centaurus stellar association. This discovery, which raises new questions about the formation of extrasolar systems, was made by an international team composed of scientists from IPAG (CNRS/Université Grenoble Alpes), LAM (CNRS/Aix-Marseille Université), LESIA (Observatoire de Paris/CNRS/Université Pierre et Marie Curie/Université Paris Diderot), the Laboratoire Lagrange (Observatoire de la Côte d'Azur/CNRS/Université Nice-Sophia Antipolis1), the CRAL (Université Claude Bernard Lyon 1/ENS Lyon/CNRS) and the ONERA. Results will appear soon in the edition of Astronomy & Astrophysics.

HIP65426b is the first exoplanet to be discovered by the SPHERE1  planet imager. The planetary system in question is at a distance of 385 light-years from the Solar System, in the Scorpius-Centaurus Association which contains between 3000 and 5000 stars that formed at approximately the same time 10 to 17 million years ago. The new planet is a gas giant with a remarkably large distance from its host star: three times the distance between the Sun and Neptune, the outermost planet in our Solar System, over 14 billion kilometres away. Its mass is estimated at 6 to 12 times the mass of Jupiter, and its temperature appears to lie between 1,000 and 1,400 degrees Celsius. The planet's spectrum reveals the existence of water in its atmosphere and the probable presence of clouds – characteristics found on previously imaged exoplanets.

The planet’s star, HIP65426 is twice the mass of the Sun. Curiously, it does not appear to be surrounded by a debris disk, as astronomers would expect from their observations of numerous other young exoplanetary systems. Surprisingly, this star rotates very quickly, raising questions as to the origin and formation of planet HIP65426b. Researchers have established two possible scenarios to explain this unique system. The exoplanet may have been formed in a disk of gas and dust; when the disk dissipated, it interacted with other planets to move to such a distant orbit. Alternatively, the star and planet may have both formed within an extreme binary star system, where two stars formed simultaneously. In that case, the more massive star would have prevented the other would-be star from accumulating the amount of matter necessary to become a star in the first place. The would-be star is what we now observe as the planet HIP65426b.

The discovery and study of gaseous exoplanets, as well as of dust disks around nearby stars, is the primary scientific objective of the SPHERE instrument, which was installed on the VLT in 2014. SPHERE is set to image such objects with unparalleled high precision and contrast. Taking images of exoplanets is a daunting task: such planets are located very close to their parent stars and compared to their host stars, they emit very little light. SPHERE can detect the signal of a planet up to a million times weaker than that of its parent star. By comparison, the instrument could detect, from Paris, the light of a candle placed 50 cm besides a powerful lighthouse in Marseille (775 km away).

SPHERE is equipped with a deformable mirror that corrects for atmospheric turbulence over nanometric scales more than 1,200 times per second. The instrument also uses coronagraphy, the phyisical blocking-out of the host star's light, to attenuate the light of the star and reveal that of the planet. Additional imaging and spectroscopy techniques are used to study both objects' physical and spectral properties.

Observing the mechanisms behind the formation, evolution and interaction of giant planets remains difficult, but understanding them is vital: these planets represent the largest mass within the planetary systems they shape. They also play a key role in the dynamics of smaller, telluric planets similar to Earth. Future SPHERE observations will be decisive in efforts to better understand the formation and evolution of extrasolar systems.

1. Member of the Université Côte d’Azur. 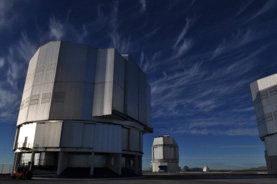 Caption:  The SPHERE instrument is installed on one of the four giant telescopes of the Very Large Telescope (VLT) in Chile. It is one of the most complex ground-based instruments for astronomical observation ever built. Its purpose: to directly image extrasolar planets.
© Claude Delhaye/ESO/CNRS photo library 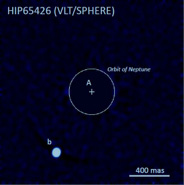 Caption: This image, captured in the near-infrared region, shows the exoplanet orbiting around star HIP65426 in the Scorpius-Centaurus association. Light from the central star is blocked by a coronagraph. The discovered exoplanet is 6 to 12 times larger than Jupiter in mass and is located at a distance three times further than the distance between Neptune and the Sun.
© ESO/SPHERE Consortium/G. Chauvin et al.

Caption: Light spectrum of exoplanet HIP65426b in the near-infrared region showing the presence of water in its atmosphere. This spectrum can be seen as the ‘fingerprint’ of the exoplanet.
© ESO/SPHERE Consortium/G. Chauvin et al.