Jupiter has cloud bands that rotate at different speeds. For nearly fifty years, one of the main issues of atmospheric dynamics has been to know whether these strips were deeply anchored in the interior of the planet or very shallow structures like the jet stream in the terrestrial atmosphere. This mystery is unraveled thanks to the analysis of the data obtained by the NASA mission. Juno could measure the gravitational field of the planet hundred times more precisely than what was done before, and comparing it to hundreds of thousands of indoor models of the planet led to the result that those winds extend to 3000 km of depth, and that deeper, the planet is rotating nearly uniformly. This discovery allows us to understand the dynamics of gas planets. They will also enable a refined analysis of the Juno gravity data with the aim of constraining the composition of the inside of Jupiter. These results are presented in three articles in the March 8th edition of the journal Nature.

Thanks to its exceptional accuracy, Juno detected an asymmetry of Jupiter’s gravity field: the attraction of the planet is different in the northern and in the southern hemispheres. This is surprising because Jupiter is a liquid planet: unlike the Earth, there is no surface or ocean. We would thus expect the planet to be in equilibrium with the same gravity field in the two hemispheres. This is not the case, as shown in an article by first author Luciano Iess, from Sapienza University, Rome. This is the first sign that Jupiter’s winds are deep enough to alter the gravity of the planet. In fact, atmospheric winds observed in Jupiter’s northern hemisphere are different from those in its southern hemisphere. If deep enough they can change the planet’s density structure sufficiently to make differences in the north and south gravity field large enough to be detectable. 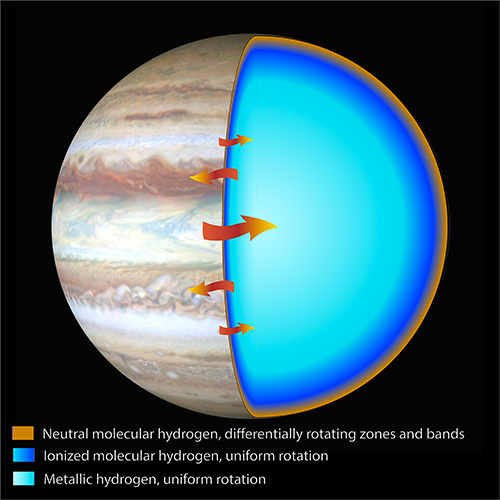 Figure N°1 : Illustration showing how Jupiter’s zonal flows at cloud level penetrate into the planet and their suppression in deeper interior. In the atmosphere, we can observe zones and belts that do not rotate at the same speed (here we subtract the average rotation of the planet to illustrate with arrows the differential rotation of these zones and belts which differ by about 100 m/s). The results of Juno show that deeper, over 3000km, we preserve the flow observed in the atmosphere while, deeper, the interior of the planet rotates at the same speed.This is explained by the fact that the interior of Jupiter becomes an electrical conductor and is then forced by the planet’s magnetic field to rotate at a uniform rate. Closer to the surface, the temperatures are lower, the gas is an insulator and is thus insensitive to the magnetic field. There, the alternance of zones and belts that we see is set by the complex dynamics of Jupiter’s atmosphere.

Indeed, a quantitative analysis of Jupiter’s gravity field north-south asymmetry shows that it requires that winds observed in the atmosphere are 3000km deep, a considerable distance (the mass of atmosphere driver by these winds is more than the mass of the Earth). This analysis is presented in a second article whose first author is Yohai Kaspi of the Weizmann Institute of Science, Rehovot, Israel.

Finally, by using both the gravitational field of the planet and hundreds of thousands of interior models, researchers independently confirm that the winds extend to a depth of 3000km and find that more deeply, the planet rotates uniformly. We can now understand the mechanisms governing the rotation inside the planet: during the first 3000km from the atmosphere, zones and belts rotate at different speeds due to meteorological phenomena. More deeply, temperature and pressure increase, hydrogen changes from an insulator to a conductor, with the consequence that the very intense magnetic field of Jupiter drags the flow into a uniform rotation. As a result, the deep interior of the planet must rotate at the same speed. These results are presented in a third article whose first author is Tristan Guillot from the Université Côte d’Azur, CNRS, and Observatoire de la Côte d’Azur, Nice, France. They also lead to the prediction that Saturn, which is less massive than Jupiter, must have much deeper winds, up to 9000km. On the other hand, massive and brown small exoplanets must have winds that penetrate less deeply.

The articles may be found by following these links :