An international team of researchers including astrophysicists from the Observatoire astronomique de Strasbourg, the Observatoire de la Côte d'Azur, and the Observatoire de Paris discovered a star that is among the least polluted by heavy elements. Such stars are extremely rare survivors of the early ages of the universe, when the gas stars are formed from hadn't yet been contaminated by the remnants of successive generations of dead stars. This new discovery opens a window onto star formation at the beginning of our universe.

For the study of the early universe, astronomers have different methods at their disposal. One is to look far into the Universe and back in time, to see the first stars and galaxies growing. Another option is to examine the oldest surviving stars of our home galaxy, the Milky Way, for information from the early universe. The "Pristine" survey, led by Nicolas Martin (CNRS/INSU, University of Strasbourg) and Else Starkenburg (Leibniz Institute for Astrophysics, Potsdam) in which participate several researchers of Côte d'Azur Observatory (Vanessa Hill, Mathias Schultheis and Georges Kordopatis, Lagrange laboratory), is looking for exactly these pristine stars.

The early universe contained almost exclusively hydrogen and helium. Throughout the life of any star, the thermonuclear reactions that takes place at their core create elements that are heavier than helium (carbon, oxygen, calcium, iron, etc.) from the hydrogen and helium that make up the vast majority of their gas. When they explode at the end of their lifetime, stars enrich the gas of their surroundings with these elements. Since this gas will serve as the birthplace for the next generation of stars, those will become, generation after generation, more and more enriched in heavy elements. This is why our sun is made up of about 2% of these heavy elements. On the contrary, very old stars contain very small quantities of heavy elements. They are however extremely rare and extremely difficult to find in our cosmic neighborhood. 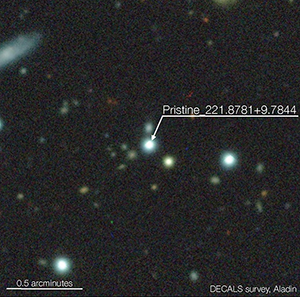 The discovery of the star unveiled by the "Pristine" team was made possible thanks to a new mapping of the night sky conducted at the Canada-France-Hawaii Telescope, located in Hawaii. The new observations focus on a small part of the ultra-violet light that is very sensitive to the abundance in heavy elements and enables a discrimination of the rare, pristine stars from the much more common stars polluted in heavy elements (we estimate that less than one star in a million is as pristine as the star that was just discovered). Follow up observations with spectrographs of the Isaac Newton Group, located in Spain, and the European Southern Observatory, located in Chile, confirmed that star Pristine_221.8781+9.7844 is almost void of heavy elements, with their densities being 10,000 to 100,000 times lower than those found in the atmosphere of our sun.

This star, whose discovery is presented in a publication of the Monthly Notices of the Royal Astronomical Society, brings strongly needed constraints on star formation models of the very first stars and opens a window onto an epoch that is still poorly understood. The discovery of Pristine_221.8781+9.7844 at the start of the "Pristine" project bodes well for the discovery of many such stars in the years to come.