The UniversCity telescope, whose construction is being finalized at Plateau de Calern, was used to obtain scientific data on occultations for the first time on July 10, 2021, by a remote observer. Both observations (the first one in the early hours of that day, the second on the following night), turned out to be positive thus producing useful measurements. They concerned the asteroids (2207) Antenor and (884) Priamus, trojans of Jupiter and selected targets of the Lucky Star project (https://lesia.obspm.fr/lucky-star/index.php).

The observations were executed by Luana Liberato, PhD student (UMR Lagrange / UNESP – Brazil), who was trained and assisted for taking the remote control of the telescope by Paul Girard (project manager of UniversCity, Côte d'Azur Observatory) and Erick Bondoux (OGS Technologies).

For the two events, the probability of getting the occultation was between 15% and 40% with the nominal shadow of Antenor not passing over the Calern site. These detections will much improve the orbit accuracy and more information on size and shape are obtained by coupling them to results obtained from other sites, including two others by our team: from the Schaumasse telescope (Mont-Gros, Nice, by Matthieu Conjat) and from a movable station (Paolo Tanga).

The UniversCity telescope is 0.5 m in diameter, and one of the main applications that drove its design is the systematic observation of stellar occultations by minor planet, in robotic mode, by exploiting the improvements brought by the Gaia mission.

Remote operations are a first, preliminary step towards the automation of the telescope. 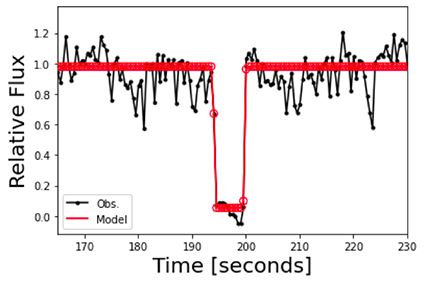 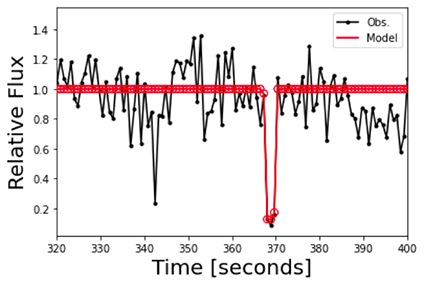 The plots show the measured signal for the stars occulted by Antenor (top) and Priamus (bottom). Both events were low in elevation and the second one was affected by heavy veils. The black dots represent the observed data, the red ones are the fitted model
(© L. Liberato, UMR Lagrange, CNRS-UCA-OCA ). 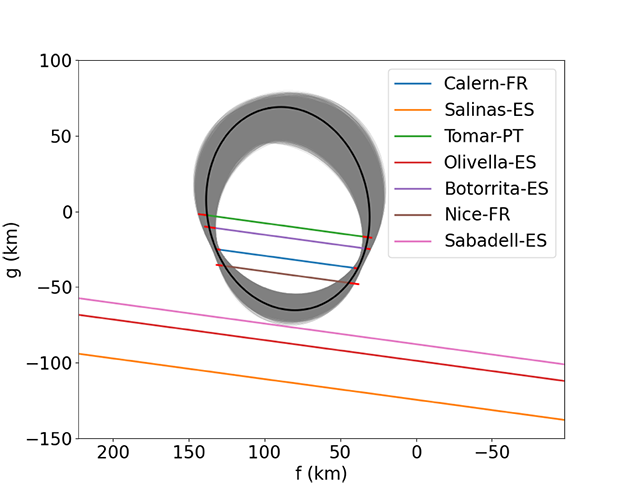 The sky-projected shape of Antenor obtained from its occultation. The positive occultation observations from different locations provide 4 “cuts” through the shape (named “chords”), reconstructed on the sky plane from the knowledge on the observer locations, the timing of the occultation, and the motion of the asteroid on the sky. The continuous lines corresponds to locations were the occultation did not occur. The resulting best-fitting ellipse (black line) has largest radius of 63.1 4.9 km and flattening of 15 7 %. The grey area represents the uncertainty on the shape.
(© L. Liberato, UMR Lagrange, CNRS-UCA-OCA – package SORA – UniversCity, Observatoire de la Côte d'Azur).