The GOLF instrument on board the ESA-NASA SOHO satellite, launched in 1995, is dedicated to measuring the solar oscillations. The solar gravity modes (g-modes) are highly damped in the outer solar layers and are very difficult to detect on the solar surface, and even with more than 20 years of observations, detections have not been confirmed. By looking « from another perspective » Éric Fossat (Lagrange Loboratory of Côte d'Azur Observatory, Nice, France) and his colleagues have succeeded in confirming the existence of these modes without ambiguity.

Among all the heavenly bodies that astrophysicists study, the only one that is really understood and the most important for humanity, is our own star, the Sun. Its remarkable stability since 4.6 billion years has allowed life to develop here on Earth. This is a result of a careful balance between two important forces : the gravitational force which pulls the Sun's mass towards its center and the pressure from thermonuclear reactions in the core that counterbalances the gravitational force. Since more than 30 years ago seismology of the Sun, or helioseismology, has revolutionised our knowledge of the Sun and its interior structure. During the 80s, a pioneering team of researchers from Nice, Eric Fossat et Gérard Grec, observed the Sun continuously during several days from the South Pole. For the first time, these observations revealed a precise signature of the global solar resonant modes. These modes, whose restoring force is pressure, are directly observable on its surface. Today they are monitored continuously using ground-based networks and space-based missions to ensure a day-night coverage. Every 10 seconds, the GOLF instrument measures the integrated signal from the solar oscillations. The technical and scientific teams ensure a careful monitering and analysis of the signal. The stakes are high : the properties of these thousands of modes place very strong constraints on the solar models, as well as, for example,particule physics that was forced to revisit their neutrino models (to attribute a mass) to explain the deficit of neutrinos observed on Earth. In fact, the solar interior model was so well understood from observations that it wasn't possible to modify it sufficiently to explain the discrepancy between the observed and predicted neutrinos. Helioseismology provided a substantial contribution to the 2015 Nobel Prize in Physics attributed to the discovery of neutrino oscillations.

In spite of these successes, the dynamics in the thermo nuclear core is still poorly constrained. Acoustic modes pass very quickly though this region and are not very sensitive to its rotation. However, there are other modes, whose restoring force is gravitation, which are very sensitive to the core conditions. For this reason the search for the solar « g-modes » has been a very active research area since more than 40 years.

The signature of the gravity modes were not found directly in the signal on the solar surface, but in the modulation of a parameter that is extracted from the pressure or acoustic modes (« p-modes »). This parameter is the time it takes for the pressure modes to propagate through the solar diameter, its core, and return to the surface (about 4 hours and 7 minutes). The continuous GOLF measurements spanning 20 years result in a precision better than one minute. The detection of this modulation directly constrains the mean rotation rate in the core of the Sun. Its period of rotation is one week (a frequency of 1644 ± 23 nHz) or 3.8 times faster than the mean rotation rates of the external and intermediate layers. This provides very strong constraints on the modeling of stellar evolution and the transport of angular momentum from the very first stages of the formation of the solar system. These results also provide constraints on particle physics.

Apart from the scientific advancement in solar- and astrophysics, this result is also remarkable in another way. The golf instrument is operational for more than 20 years thanks to a huge international collaboration spanning many decades. Additionally, GOLF is a space-borne instrument, based on experimental developments initially designed in a French laboratory for south-pole campaigns in the 80s. It does not produce spectacular images to woo the public or to justify continuing research projects. The critical results concerning the solar core place emphasis on the importance of providing a long-term stable environment supporting fundamental research. 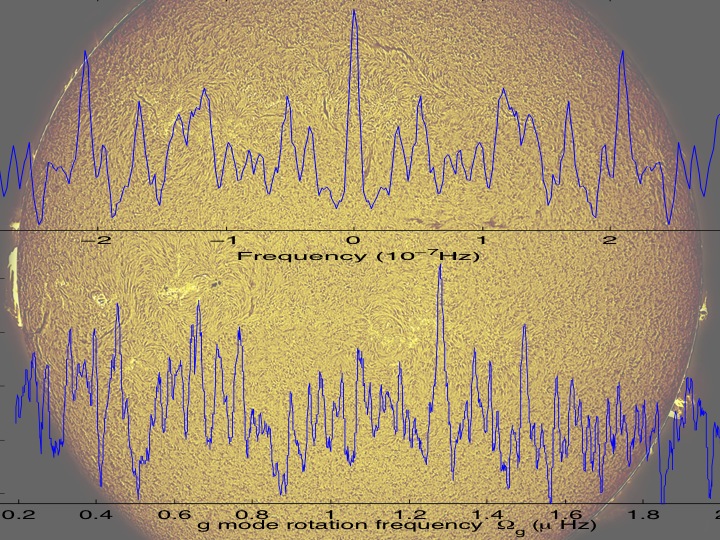 The top figure shows the mean profile of 76 dipolar g-modes, with a slightly dominating central peak and two symmetric side-bands at ±210nHz due to rotation. The rotation is in the deep layers, but detected in the outer layers thanks to the pressure modes which bring the signal to the surface.

The lower figure shows the sideral rotation speed of 1.28 ± 0.01 μHz associated with the dipolar and quadripolar (degrees 1 and 2) g modes where the signature was detected. This corresponds to a period of one week for the core, while the intermediate radiative zone and the surface convective layers rotate at about 27 days.