Within the framework of site qualification for the E-ELT and its dome design, local turbulence due to the immediate environment of the telescope must be taken into account. A better knowledge of the phenomenon and its modeling becomes crucial if one wants to optimize the performances of the telescope. However, in contrast with the rest of the atmosphere, the surface layer turbulence is affected by ground and environment characteristics (convective flow, roughness, etc.). Some models were proposed to link the image quality to the heat dissipation in the surface layer. A new instrument was developed by our group for the characterization of the local turbulence inside the telescope enclosure. It consists of the wavefront analysis by means of parallel laser beams on a multi-baseline configuration. The fluctuations of the angle of arrival (AA) are measured with CCD camera and their longitudinal and transverse covariances at different baselines are compared to the theoretical ones. The choice of the configuration of the parallel beams is important to obtain an optimal sampling of these AA covariances. Other statistics of these measured AA fluctuations lead also the local Fried parameter, outer scale and coherence time.

Principle of the Lotuce instrument.

INTENSE: a new instrument for turbulence charcterization inside clean rooms of spatial laboratories

Air around optical instrumentation can have crucial impacts on its performance. For example, optical turbulence inside a dome can have a signi-cant contribution to the degradation of the optical resolution of the telescope. In a similar way, clean rooms for optical integration and testing are submitted to optical turbulence. In a clean room, particle concentration is strictly regulated by sophisticated air circulation and -ltering. For example, an ISO 5 (class 100) rated clean room (no more than 100 particles larger than or equal to 0.5 micrometers per cubic foot of air) requires 400 to 480 air changes per hour. Such a high air circulation generates optical turbulence that has dramatic impact on the optical seeing while testing optical properties of a space telescope for deep universe or Earth observation. Within this framework, we built a new instrument called INTENSE for INdoor TurbulENce SEnsor. It consists of the wave front analysis by means of parallel laser beams on a multi-baseline con-guration. Similar to the Shack-Hartman method, we measure the fluctuations of the Angle-of-Arrival (A.A) of the laser beams using a small telescope equipped with a CCD camera. The positions of the center of gravity of each laser beam point spread function are recorded over several hours. From the variances of A.A fluctuations, we can derive several turbulence key parameters
(Fried parameter, structure function CN2 and outer scale). The temporal spectrum of A.A fluctuation can be compared to existing models and cut-o- frequencies can be extracted to calculate the wind speed and the size of the outer scale. Moreover the -ve parallel laser beams leading to ten di-fferent baselines from 0.05 to 2.5m
in addition to the variance measurement are used to -fit with the theoretical models. Our instrument has been constructed in order to work in a noisy industrial environment where multiple vibrations sources can interfere with the A.A fluctuation measurements. During several measurement campaigns, we have found various turbulence conditions depending on clean room rating and air regulation condition. Our results give new insight into clean room design for optical instrument testing and integration. 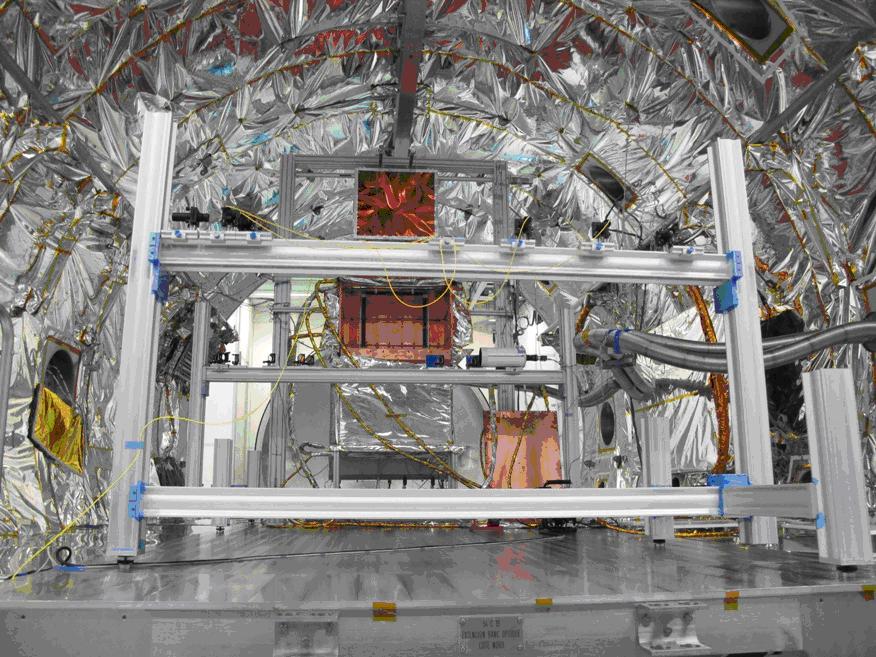