Despite the fact that nearly 1 million asteroids have been discovered so far and their orbits catalogued, fundamental properties, including composition, mass and density, are known for only a very limited fraction of them.

This obstacle poses a fundamental limitation of our capacity to explore the evolution of the Solar System and eventually place our understanding in the wider context of planetary systems formation. In fact, the asteroid population has been affected by dynamical processes (mean motion and secular resonances, evolving during planetary migration) and collisional erosion. One of the results of such processes, still active today, is the injection of small asteroids towards Earth-crossing trajectories, resulting into the observed population of Near Earth Asteroids (NEA).

With the proposed study we intend to take profit of the unique opportunity offered by the data releases of the ESA cornerstone mission Gaia (Prusti et al. 2016). Gaia started its 5 years survey in July 2014, to characterize all astrophysical sources down to V=20.7, by measuring their position, motion and spectral properties. Its ultra-precise astrometry is the unbeatable driver for Gaia science. Our team has been working on the implementation of the Gaia data processing since 2006.

In 2018 we have recently tested and validated the sample of asteroid astrometry (~2 million epoch measurements for 14,000 objects), published for the first time in DR2 (Gaia Collaboration - Spoto et al. 2018). Our results confirm milli-arcsec (mas) accuracy for epoch astrometry, provided by Gaia. By 2019, Gaia is estimated to have observed 350,000 asteroids (~half of the known population, Tanga et al. 2008). In December 2020, an early update (EDR3) was published, and in 2022 the full DR3 will appear, expanding by 10 times the sample of asteroid astrometry and improving over accuracy and time coverage all the Gaia data products.

We focus our efforts on exploiting Gaia results, using the technique that has the largest potential of providing space-grade astrometry from ground today: the observation of stellar occultations by asteroids. In terms of absolute position, an occultation provides an astrometric measurement for the asteroid that can reach the accuracy of the astrometry of the target star. As a consequence, “occultation astrometry” offers the unique opportunity to extend the accuracy of Gaia on asteroids positions, beyond the time frame of mission operation, and also backwards in time, relying on observed occultations.

Tanga and Delbo (2007) showed that as sub-mas accuracy positions of stars and asteroids become available through Gaia, the number of observable occultation events with accurate predictions is expected to expand by orders of magnitude. The consequence is a change in the way asteroid occultations can be approached in general:

This (r)evolution, which became possible with Gaia, contemplates a different, complementary role for fixed and movable telescopes. The first category of instruments can take profit of the statistically large number of observable occultations per site. The second, can be deployed to target specific objects, especially when their angular diameter is small (such as in the case of Near Earth Asteroids).

Our preliminary tests with stellar astrometry from DR1 on past occultations (Spoto et al. 2017) show the potential of this technique to provide improved solutions for asteroid trajectories. For NEAs, rare radar ranging measurements are considered key in achieving the accuracy needed to measure the tiny Yarkovsky orbital drift; as we have recently shown, Gaia observations carry a weight similar to (or better than) radar.

Being able to obtain dynamical and physical data (by the measurement of Yarkovsky and the derivation of bulk density from it) is an essential task for the characterisation of any NEA and a first step to understand their origin in the belt, and their internal structure. Our data will be even more important starting from now, with the lack of radar ranging astrometry that was provided by the Arecibo radio telescope for planetary defence tasks.

The first successful observation of an occultation by a small NEA (that has both radar observations and Gaia DR2 astrometry) came in 2019, with the fast-moving NEA Phaethon – the target of JAXA’s DESTINY+ mission – that casts a shadow of only ~6 km on the ground. The first observation was in July, putting a very strong constraint on the orbit. It was then “easier” to predict following events. In particular, we observed a successful event on October 15, 2019, producing the best occultation astrometry for a NEA to date (summary in figure below). We used a portable 1m telescope with a ~1,000 Euros digital CMOS camera (equipped with GPS timing) – able to shoot at ~100 frames per second. The time resolution of this fast event (duration only 0.218 sec!) provided a ~0.002 sec formal uncertainty on the central occultation epoch. 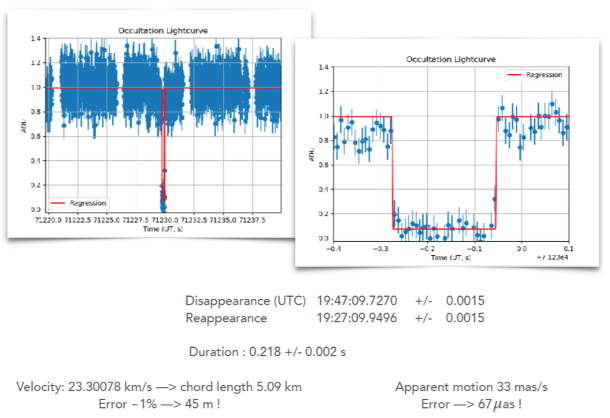 Towards the extremities of the Solar System, the power of accurate stellar occultation observations was demonstrated by another record breaking performance: the successful events by ~36 km sized Arrokoth (aka ‘Ultima Thule’), the distant Kuiper-Belt object, visited by the New Horizons spacecraft. Using DR2 and dedicated astrometry by the Hubble Space Telescope (HST), it became possible to observe multiple chords from several occultations, with low-cost 11-16” portable telescopes and the active involvement of amateur astronomers and local communities. The Arrokoth observations were seminal for the mission, as they enabled planning the fly-by and the relevant camera operations, based on strongly improved orbit constraints (Buie et al. 2020). Similar efforts are ongoing for other mission targets, including several Trojan asteroids – targets of NASA’s Lucy mission.

Improving our knowledge on NEA

Some NEAs have better-known orbits than others. For example, the current orbital uncertainty on the Hera mission target Didymos is several kms in semi-major axis, roughly ~10 times bigger than its size and expected cross-track dimension of its shadow path. On the other hand, the ephemeris uncertainty for the ~5 km-sized Phaethon is less than 3 km. This suggests that the primary goals and the strategies of chasing occultations by these two NEAs cannot be the same. Securing even a single chord in an upcoming event would be the primary goal for Didymos, to improve its astrometry. For other NEAs, we can actually take advantage of the already exquisite astrometry, to obtain details of their shape and size by successful multi-chord observations, despite their extremely small size. This information can in turn be fed into detailed dynamical models, allowing e.g. (by a measurement of Yarkovsky) an estimation of density or of thermal properties.

Observing a first successful occultation is the most straightforward strategy to make an object transition from the first category (approximate prediction) to the second (ultra-accurate orbit). Special effort must thus be devoted to deploy a sufficient number of telescopes, with a spacing on the ground compatible with the uncertainty of the prediction and the scientific goal.

We propose to focus on the astrometry of small (<5 km) NEAs, probing the limits of this method. Significant reduction in orbital uncertainty can lead to significant improvement of NEA risk assessment, excluding false impact alerts. To this end, we will systematically pursue observations of a selected set of NEAs, with different levels of available astrometric accuracy, to allow evaluation of the efficiency of our methodology.

The gradual transition to increasingly difficult events will be supported also by the observation of a number of small Main Belt asteroids, that provide a large sample of events for any site, both to optimize the observation techniques, and to test and refine prediction and orbit refinement strategies.

Specific priority will be given to (actual or perspective) mission targets, such as the binary NEA Didymos -- target of the DART (NASA) and Hera (ESA) missions -- and the potentially hazardous NEA Apophis. Over the time span of our project some occultations are available for Didymos. Observing positive events will be extremely important to prepare the sequence of opportunities that will come later on, mostly around its closest approach to Earth (October 2022) and for several months after. Similarly, for Apophis, several occasions are predicted in the same period, some of them involving rather bright stars.

Following the DART impact, differences between the predicted (based on the most accurate, pre-impact orbit) and measured occultation epochs – accumulating over time – could enable a direct measurement of the asteroids’ heliocentric deflection. The estimated change of Didymos’ heliocentric velocity by DART is 1-3 m/day. 3-4 months past the impact, a ~300 m offset in position would correspond to a detectable >0.05-0.1 sec offset in occultation epoch, assuming an event of only 0.2 sec duration for a ~1km diameter of Didymos -- as can be verified by 'predicting' simulated events.